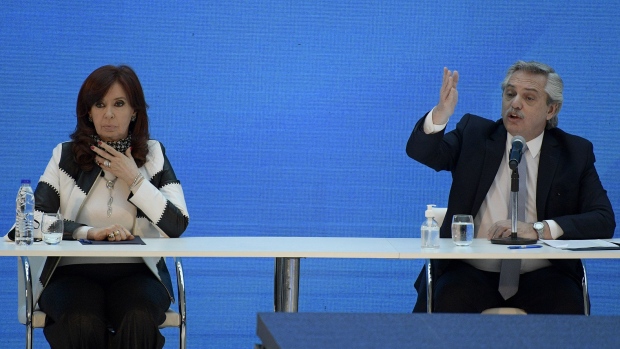 (Bloomberg) -- Argentina’s new ban on exports of its famed beef won’t quell runaway inflation if previous interventions are any guide.

With red meat prices up about 65% annually, easily outpacing 46% inflation, the government of President Alberto Fernandez is suspending beef shipments by the world’s fifth-largest exporter for 30 days.

While the measure may reap quick political benefits, the long-term repercussions for the beef industry are well-known in Argentina, which implemented similar restrictions for a decade through 2015: Ranchers quit, production falls and the pressure on prices resumes.

“It’s not even clear to me that this is going to have a genuine impact in controlling food inflation,” said Maria Castiglioni, director of consulting firm C&T Asesores in Buenos Aires. “To lose market share when it takes so much time to open up new export markets, and to begin to lose jobs in a sector that’s working well, this measure is really inexplicable.”

Fernandez saw the impact of banning exports first hand back in 2006, when he served as cabinet chief to President Nestor Kirchner, the late husband to current Vice President Cristina Fernandez de Kirchner, who also governed the nation from 2007 to 2015. Just like now, the idea back then was to force more beef onto the local market and to cool domestic prices.

But the measure backfired. When ranchers turned their backs on the industry following the ban, Argentina lost nearly 20% of its cattle herd by 2011. Cattle prices rose more often than not in the following years, including a 126% annual increase at the end of 2010, and the country was overtaken by smaller neighbors Uruguay and Paraguay in the international market.

So far, the official decree that would implement the new ban hasn’t been published. Still, the announcement drew ire across the industry, with business chambers ceasing all beef sales for several days and farmers calling for protests.

Like the old ban, ranchers and business advocates worry this one could last far longer than originally advertised.

“Back in 2006 the ban was supposed to be for 180 days and it ended up lasting 10 years,” said Miguel Schiariti, president of beef industry and trade group Ciccra, referring to tight export controls thereafter. “They’re blaming the sector for prices but inflation is the government’s fault because of the fiscal deficit and money printing.”

Fernandez argued he was forced to take action as global commodity prices jumped in recent months, leading beef prices in Argentina to get “out of control.”

Suspending beef exports gives the government political ammunition at a time when the ruling Peronist coalition confronts fierce infighting ahead of midterm elections in October. By pointing the finger at wealthy farmers, seen as traditionally opposed to Peronism, Fernandez may find a scapegoat to rally his voter base and deflect blame for the accelerating inflation that’s hurting his approval ratings.

“If you’re not going to resolve the problem, you have to find enemies,” said Marcelo Elizondo, an economist specialized in trade. “Peron himself talked about the ‘beef oligarchy’ 70 years ago. For the Peronist voter, this is very traditional.”

At the same time, the clash with farmers shows the increasing power of the far-left wing of the coalition, led by Kirchner. Some senior officials opposed the ban when it was first floated in April, according to a person with knowledge of the matter. Fernandez himself told beef exporters in November that he saw them as a focal point in the economic recovery, and during his campaign he said exports were Argentina’s only source of dollars.

Among farmers, the fear is that Argentina is eroding gains made under the agriculture-friendly policies of former President Mauricio Macri, who governed from 2015 to 2019. The cattle herd rose by 2.3 million during his presidency and beef exports were one of Argentina’s few success stories in a period marred by recession.

“They insist on doing things that already caused a lot of damage and didn’t work,” said Juan Ouwerkerk, president of Alfa, a farm cooperative in southern Buenos Aires province. “The government is painting us as enemies just a few months before elections, it’s a populist move.”

(Updates with details on decree in 7th paragraph)