Oil strength driven by Ukraine tensions could be short-lived: Strategist

Investors are pumping more money into commodity funds than at any time in the last decade, enticed by red-hot inflation and a futures market offering big profits.

Tight supplies of everything from aluminum to oil to grains have sent raw-material prices to a record, while also pushing markets into backwardation, where near-term supplies fetch a premium. That’s allowing investors to book returns by selling spot contracts and buying later-dated ones at lower prices.

Cash has flooded into commodities as fund managers seize that opportunity and seek a hedge against the fastest spike in consumer prices in decades. Citigroup Inc. estimates retail and institutional money in the sector at close to US$700 billion, the most since at least 2007. That may also be further fueling the rally.

The huge inflows come as inflation and interest-rate bets roil wider markets, and mark a turnaround for index-tracking funds that proved notoriously unprofitable when the last commodities boom turned to bust in the 2010s. Back then, weaker demand and more supply saw many spot prices move into big discounts, leaving investors exposed to losses when rolling contracts forward. 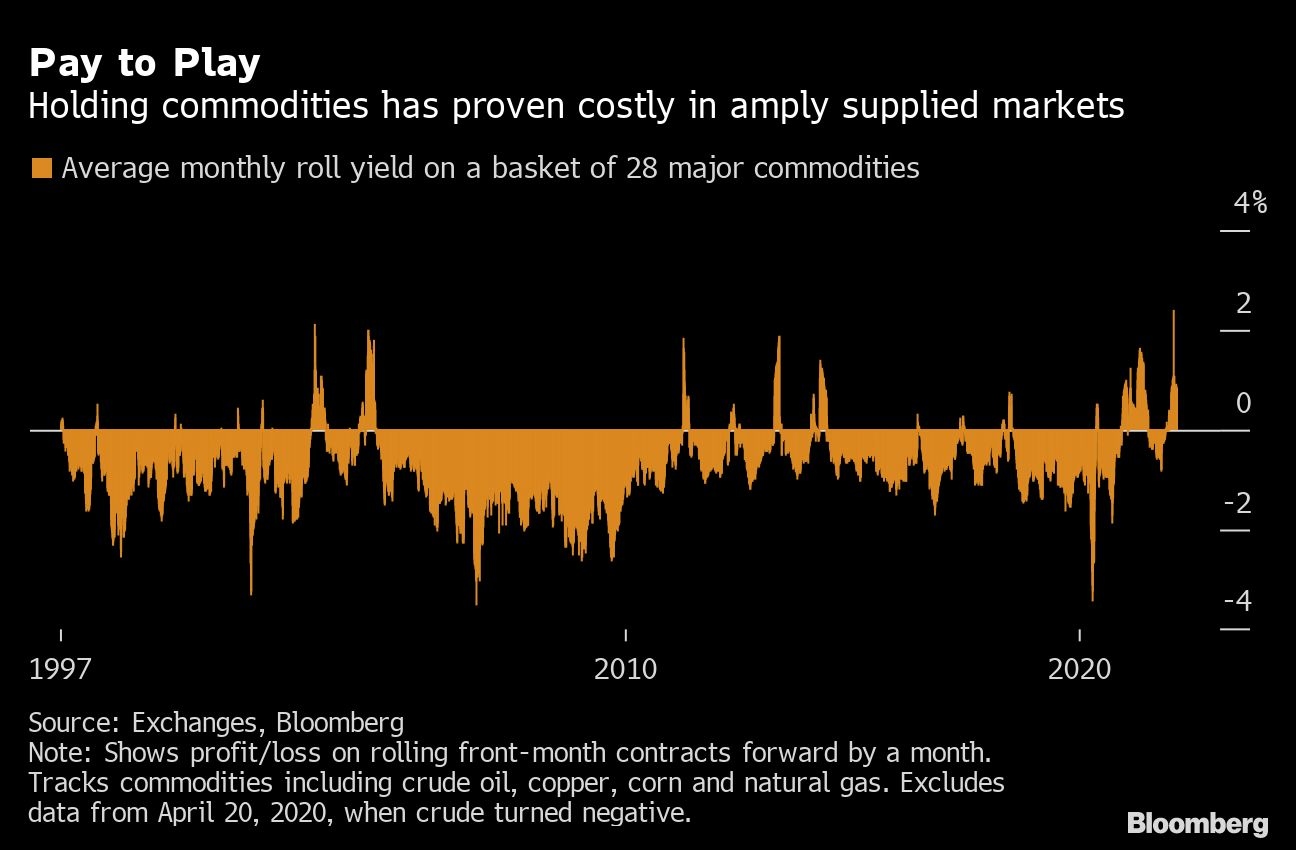 Backwardation is “a huge tailwind to the investor mindset,” said Jason Bloom, head of fixed income and alternatives ETF strategy at Invesco, which has seen US$1.8 billion pile into its biggest cross-commodity exchange-traded products this year. “People for the first time in 14 years have come to the idea of ‘Holy cow, inflation is a problem.’”

As an example of how appealing forward curves are, commodities like crude can offer monthly returns of more than 3 per cent by rolling expiring positions forward by a month, even if outright prices don’t budge. Markets like aluminum, which spent most of the last decade in contango -- the opposite structure to backwardation -- are  also proving alluring to yield-hungry investors, particularly as inflation hurts returns in other assets.

That’s prompting more money to be switched into commodities, according to Ryan Issakainen, a senior vice president at First Trust Portfolios.

Commodities have also been boosted lately as the crisis over Ukraine sparks worries about potential supply disruptions. Russia is a major source of metals including aluminum and nickel, a large oil and gas producer and a heavyweight in wheat. Russia, which denied it intends to invade Ukraine, has been hit by limited initial Western sanctions after tensions escalated.

Broad-based commodity exchange-traded funds now hold more than US$21 billion, the most since at least 2007, according to data compiled by Bloomberg. First Trust’s Global Tactical Commodity Fund has surged to a record US$2.6 billion as it pulled in money this month.

That rapid growth does pose risks, however. Positive roll yields are of little use when a market suddenly collapses -- which commodities are prone to do.

Big inflows can also leave funds holding a large share of contracts in a market, which can potentially make it hard to move in and out of positions without disrupting prices. For example, Invesco’s two commodities ETFs hold about 25 per cent of open interest in December Nymex gasoline, exchange data and figures on the company’s website show.

That’s partly because the sector largely tends to follow the two main commodity index products -- the S&P GSCI Index and the Bloomberg Commodity Index. But the systematic nature of such investments mean inflows can grow so quickly that they then risk roiling markets, as happened when wagers via the U.S. Oil Fund contributed to mayhem in crude in 2020.

Funds aren’t too concerned for now though, even with millions of dollars being plowed into commodities every day.

“We’re nowhere near what we consider to be concerns about capacity,” Bloom said. “I hope we have that problem in a year or two. I would say that generally speaking, there’s still a huge part of the investment community that is underinvested in commodities.”