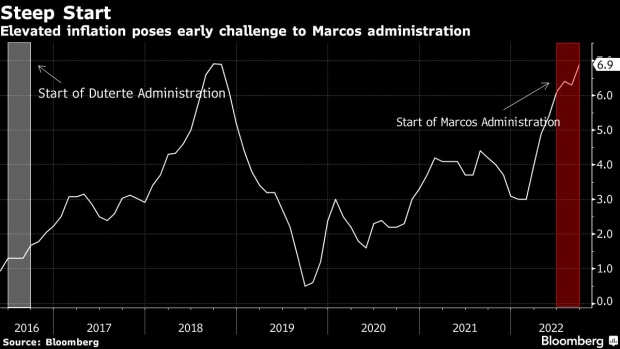 Ferdinand Marcos Jr., Philippines' president, speaks during a Bloomberg Television interview in New York, US, on Friday, Sept. 23, 2022. Marcos has pledged to strengthen political and economic ties with the US, in contrast with his predecessor Duterte, saying that his nation looks to the US whenever in crisis. , Bloomberg

(Bloomberg) -- The Philippine currency plunging to a record low and inflation at a four-year high have taken centerstage in the early days of President Ferdinand Marcos Jr’s term, risking faster economic recovery and his popularity.

The nation’s central bank has embarked on one of the region’s most-aggressive monetary tightening to rein in price pressures, which if not contained have a tendency to spur discontent. In Pulse Asia Research Inc.’s survey last month, managing inflation was the top priority for the respondents and nearly half disapproved of the government’s performance.

“The recovery story is holding up well, and fundamentals are firm, but this could quickly take a U-turn if inflation and depreciation spirals out of control,” said Dan Roces, economist at Security Bank Corp. Close coordination between the government and the central bank is “paramount,” he said.

Marcos, who came to power on a landslide win, has said he will prioritize protecting purchasing power by managing inflation and enhancing food security. He has described his government as “functional” after he appointed technocrats to manage the economy.

He was confronted with sugar and salt shortage in his first 100 days in office while the outlook for local rice harvest dimmed after a recent typhoon.

Here are charts tracking the economy during Marcos’s early days:

The Southeast Asian nation is vulnerable to global price shocks as it imports key commodities including fuel and rice. To mitigate the impact of high prices, the government has pledged to fast-track fuel discounts and cash aids to the poor, while Marcos considers purchasing fuel from Russia.

These moves will take time before they are felt by the public, said Jonathan Ravelas, managing director at consultancy firm eMBM Services. “It’s a work in progress. We’re just caught in a global storm of high inflation and interest rates. Without the war in Ukraine, the government would have actually seen some gains.”

While Marcos likely retained strong public support in his first months, how he addresses issues affecting purchasing power could impact his popularity in the future, said political scientist Cleve Arguelles.

As the peso plunged, the nation’s main stock market index entered bear market territory. About $34 billion in stock market value was wiped out in September amid concerns of a global recession.

A windfall from high prices of crude imports means the customs agency’s collection has been exceeding targets, boosting total tax revenue by 28% from a year ago in August.

That helps offset the higher cost of borrowing for the Bureau of the Treasury that had to reject bids at recent auctions to cap yields. The government recently raised $2 billion from global bond market.

Marcos had pledged to reduce the debt-to-GDP ratio to 61.8% by year-end before trimming it further below 60%, a commitment the government must deliver to keep the current debt rating, if not improve it.