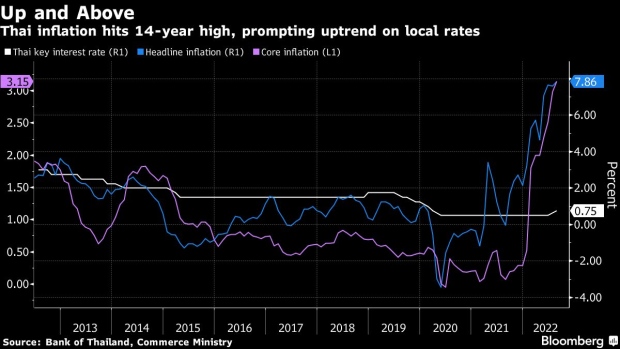 (Bloomberg) -- As Thai politicians jockey for positions ahead of elections that must be called by March, focus is turning to how the next leadership will manage risks including sky-high prices, a bloated budget deficit and the highest level of household debt in the region.

The tepid pace of recovery in Southeast Asia’s second-largest economy will be front and center for voters as authorities grapple with the fastest inflation in 14 years, the baht’s plunge to a 2006-low and household debt at 88% of gross domestic product.

“While the recovery in tourism will help support growth over the next two to three years, an aging population and high household debt places Thailand as the laggard in the region,” said Ju Ye Lee, an economist at Maybank Investment Banking Group. “These are challenges that will not be easily resolved even with a new prime minister.” Tourism makes up 12% of GDP.

Prime Minister Prayuth Chan-Ocha, who last week won a favorable court ruling on a tenure dispute, has seen his popularity slide, reflecting the growing public disappointment with his government’s efforts to rebuild the economy that’s still reeling from the pandemic and lagging peers in the region.

Here are some of the economic challenges the next administration will likely inherit:

Thailand’s recovery has been uneven, with those in exporting industries bouncing back faster while low-earners and tourism workers struggling amid inflation above 7%, triggering the first price hike in a decade among noodle makers and the first increase in minimum wage since 2020. Lately, the nation has to worry about the impact of floods too.

The Bank of Thailand is expected to keep tightening rates although at a gradual pace compared to peers in the region. Lenders have subsequently raised rates also. BOT has said price gains should cool to within its target by mid-2023.

Net-oil importer Thailand continues to subsidize diesel, electricity and cooking gas. The cabinet extended some of the support until Nov. 20, mindful of the pain on consumers that’s also exacerbating household debt.

Household debt has jumped by 1.1 trillion baht ($29.3 billion) to almost 90% of GDP from 80% pre-pandemic. Although the ratio eased slightly in the second quarter, it remains the highest in Southeast Asia, making it tougher for the government to stimulate the economy. In the past, frustration with debt has sparked protests among farmers.

The government has spent about $5.5 billion to subsidize energy prices, and the latest extension will increase the bill by another 20 billion baht. The budget gap ballooned to a record 700 billion baht in the fiscal year that ended September compared with 450 billion baht in 2019.

“We have exhausted all the fiscal ammunition during Covid with relief schemes and cash handouts,” said Kiatanantha Lounkaew, a lecturer of economics at Thammasat University. On the brighter side, borrowing for the fiscal year that started Oct. 1 was set at 1.05 trillion baht, substantially lower than the record 1.8 trillion baht in fiscal year 2021.

The baht has lost 20% since the end of 2020. While this may be good for exports and tourism, the volatility hits investors and consumers.

There had been calls on the the BOT to reconsider a hands-off stance as the baht depreciates. The Federation of Thai Industries, the nation’s top business group said companies want a stable baht to prevent inflation from squeezing their profit margins.