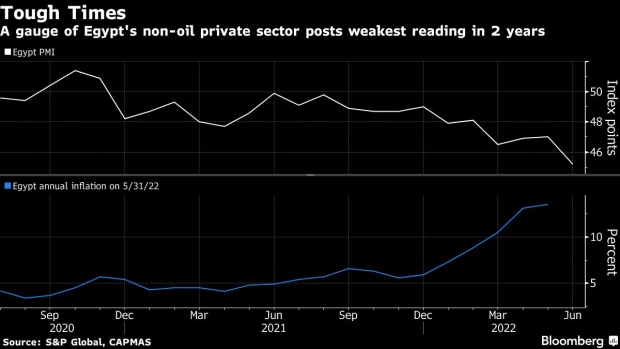 Workers bake bread for sale at the Al-Monira market in Cairo, Egypt, on Wednesday, June 1, 2022. Global food prices are soaring near the fastest pace ever as Russia’s invasion of Ukraine chokes crop supplies, with Egypt, the world’s biggest wheat buyer, now grappling with higher import bills as the conflict causes a run-up in grain and energy costs. Photographer: Islam Safwat/Bloomberg , Bloomberg

(Bloomberg) -- Egypt’s non-oil private sector economy had its worst performance in two years as demand slumped after a sharp spike in prices and the pound’s devaluation while businesses struggled to secure the necessary supplies of raw materials.

Input costs soared at the fastest pace for almost four years, prompting companies to raise their selling charges the most since February 2017, according to a survey published Wednesday by S&P Global. Its Egypt Purchasing Managers’ Index dropped to 45.2 last month from 47 in May, remaining below the 50 mark that separates growth from contraction for the 19th straight month.

Higher borrowing costs and deepening price pressures are leaving Egyptian businesses exposed to an extended downturn. The central bank allowed the pound to weaken sharply in March and raised interest rates as the economy came under pressure from a surge in food and fuel prices.

S&P said respondents experienced higher import fees as a result of the currency’s devaluation, adding to such “root drivers” of inflation as supply constraints and transport expenses. The monthly increase in prices was the largest since the survey began in April 2011, it said.

“June PMI data shows that hawkish monetary policy in the US and a rising dollar value is likely to keep supply side inflation running high,” said Owen. “Supply conditions also remained weak and added to inflationary pressures, as firms signalled that raw material supplies were becoming increasingly difficult to secure.”

Despite the deterioration in economic conditions, businesses grew more optimistic about the outlook, with overall sentiment improving to a five-month high.