Annual inflation was 5.7 per cent last month, up from 5.1 per cent in January, Statistics Canada reported Wednesday in Ottawa. That’s the highest since August 1991 and exceeds the median estimate of 5.5 per cent in a Bloomberg survey of economists.

The average of the central bank’s core measures -- often seen as a better indicator of underlying price pressures -- rose to 3.47 per cent, also the highest since 1991.

On a monthly basis, prices rose 1 per cent in February. Inflation is set to keep climbing after Russia’s invasion of Ukraine sent commodity prices higher, raising questions about whether central bank officials have been too slow to recognize risks and correct policy.

Wednesday’s report reinforces expectations that Governor Tiff Macklem will continue a rate-hike cycle at the next policy meeting on April 13. The central bank projected in January that inflation would rise to slightly above 5 per cent at the start of 2022 before slowing to 3 per cent by the end of this year, but those forecasts are already stale. 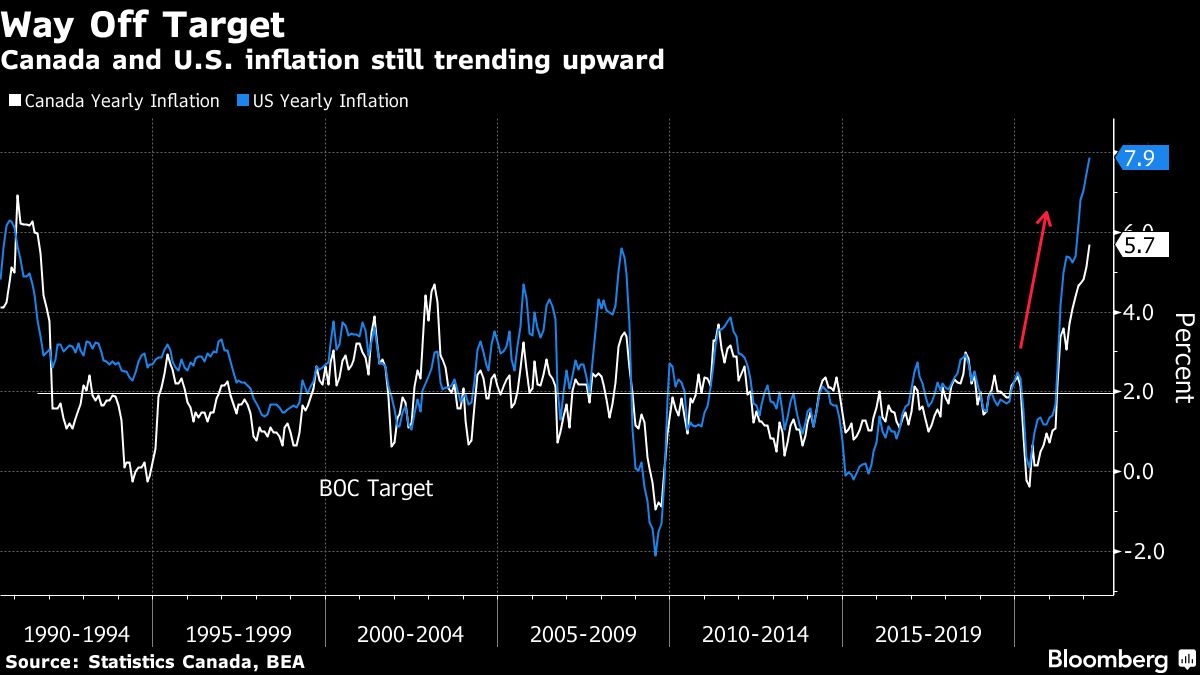 Price gains were broad-based in February, which marked the second straight month headline inflation exceeded 5 per cent. Canadian motorists paid 32.3 per cent more for gasoline compared with a year earlier, while prices for groceries rose 7.4 per cent -- the largest yearly increase since May 2009.

Shelter costs rose 6.6 per cent from a year earlier, the fastest pace since August 1983. Higher costs for both owned and rented accommodation contributed to the increase, with a recovery in youth employment and the resumption of international migration to Canada supporting rental demand.

Inflation has now exceeded the central bank’s 1 per cent to 3 per cent control range for 11 straight months. Since Canada introduced inflation targeting in the early 1990s, the inflation rate has averaged about 1.8 per cent.

Earlier this month, Macklem raised the bank’s overnight rate to 0.50 per cent, from the emergency low of 0.25 per cent that was in place since March 2020 when the COVID-19 pandemic hit North America. Markets are pricing in seven increases in borrowing costs over the next 12 months.

Economists are warning price gains will heat up further before fading later in 2023. The war in Ukraine and the lifting of most COVID restrictions across Canada -- which added 337,000 jobs last month -- will only fan inflationary pressures.

“Headline inflation could reach 6 per cent in March, given the recent spike in commodity prices and the further reopening of the economy, which could see services prices rising further,” Royce Mendes, head of macro strategy at Desjardins Securities Inc., said by email.

“While inflation should begin to settle down thereafter, the labor market now appears to be operating at full employment,” Mendes said. “As a result, there will be a handoff from global inflationary pressures to domestically-driven price growth.”