The window for Trudeau to do something substantive is getting tighter and tighter: James Moore

Prime Minister Justin Trudeau will be under pressure to make his economic agenda more left-leaning and expensive as he starts his third term without a majority in Canada’s parliament.

Trudeau won Monday’s election by promising voters he’d make homes and child care more affordable, raising money for programs by hitting the banks with billions in new taxes. Smaller parties, whose votes his government needs to pass laws, will want to make sure he delivers.

Trudeau’s critics in the halls of Canadian industry are already warning about runaway spending, with economist David Rosenberg saying his win puts free-market capitalists “in the penalty box.”

Here are the key economic decisions the re-elected minority Liberal government will have to make in the near term.

Trudeau already won approval for a big-spending budget this year that included $140 billion (US$109 billion) in additional measures over the next five years. The country already recorded a record-smashing deficit of more than $300 billion deficit forecast in the fiscal year ended March 31 because of COVID-19 support programs. 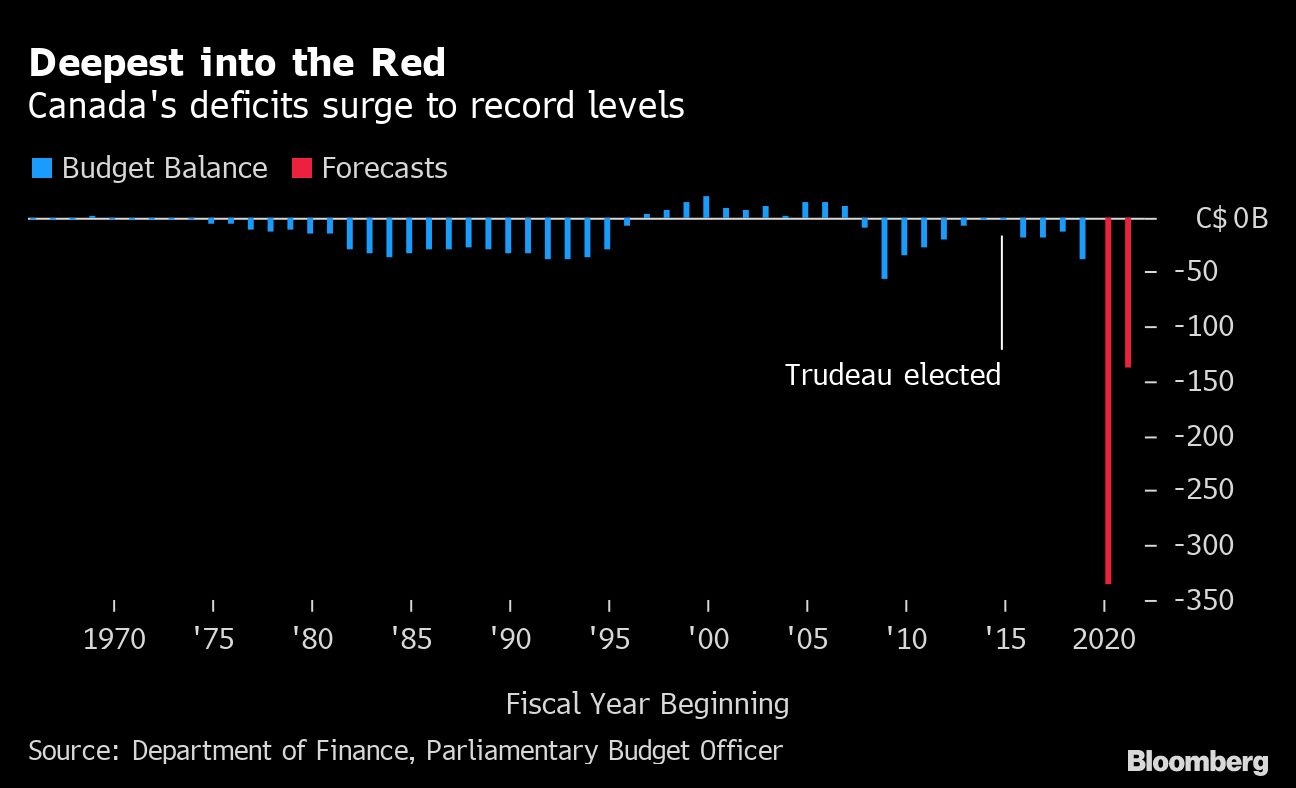 The risks are now that spending will shoot even higher. The Liberal platform included $78 billion in new campaign promises. Without a majority in the House of Commons, the government will need to placate either the New Democratic Party, which has a long list of demands for new social spending, or the Bloc Quebecois, which will want even more transfers from the federal government for Quebec.

Helping the outlook is a better picture for revenue than what was forecast in April.

Finance Minister Chrystia Freeland should provide some type of fiscal update in November or December and then produce a new budget early next year. To assuage concerns about debt, the Liberals will continue promising to keep the nation’s debt to gross domestic product ratio falling over time. But Trudeau’s track record of meeting fiscal targets isn’t great.

One key task after the election will be the five-year renewal of the Bank of Canada’s inflation mandate, which expires this year. The central bank and the federal government will need to sign off as early as next month on any changes to the 2 per cent target in the existing mandate. 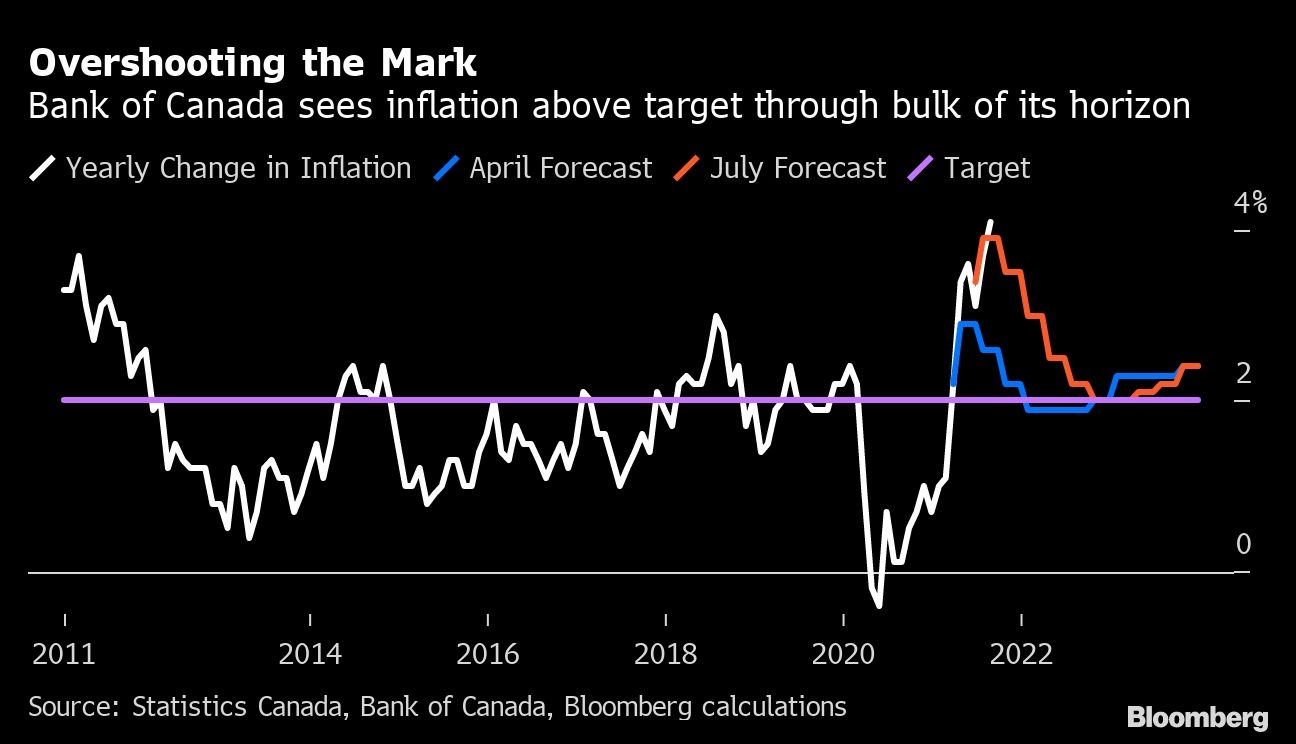 With the U.S. Federal Reserve moving to average-inflation targeting last year that’s allowed it to overshoot 2 per cent, there could be some pressure on Canada to do the same. Already, Canadian inflation has risen above the bank’s 3 per cent cap for five straight months.

Early in the five-week campaign, Trudeau said the matter wasn’t a priority for this government. But it will be one of the first things on the desk for Freeland.

The Liberals have pledged to keep deficits in check somewhat by raising taxes. Both the Liberals and their most natural ally, the NDP, have promised higher taxes on businesses.

Trudeau pledged to hike by 3 percentage points the levy paid on bank profits over $1 billion while hitting tech giants with new charges. The NDP wants to raise tax rates on corporate income and capital gains, as well as on wealthy individuals. It’s hard to see business not paying a bigger share come next budget.

Other initiatives expected to be brought forward quickly include new regulations that will compel streaming services and social media platforms like Netflix Inc. and TikTok Inc. to finance and promote Canadian content. Trudeau had introduced a bill to regulate the sector in the previous parliament that failed to get through the Senate before he triggered the election.

Then there’s Rogers Communications Inc.’s US$16 billion takeover of smaller rival Shaw Communications Inc., which is controversial because it removes a competitor from the wireless market. The deal will undergo a lengthy antitrust review and will end up on the government’s desk for a decision in the first half of 2022.

Trudeau campaigned on a raft of initiatives designed to make it easier for first-time buyers to get into the housing market, from a new loan program, to tax credits, to a reduction in mortgage insurance costs. While all these ideas may help some people, it may not be long before they’re just reflected in higher prices as people use the extra cash to make bigger bids. 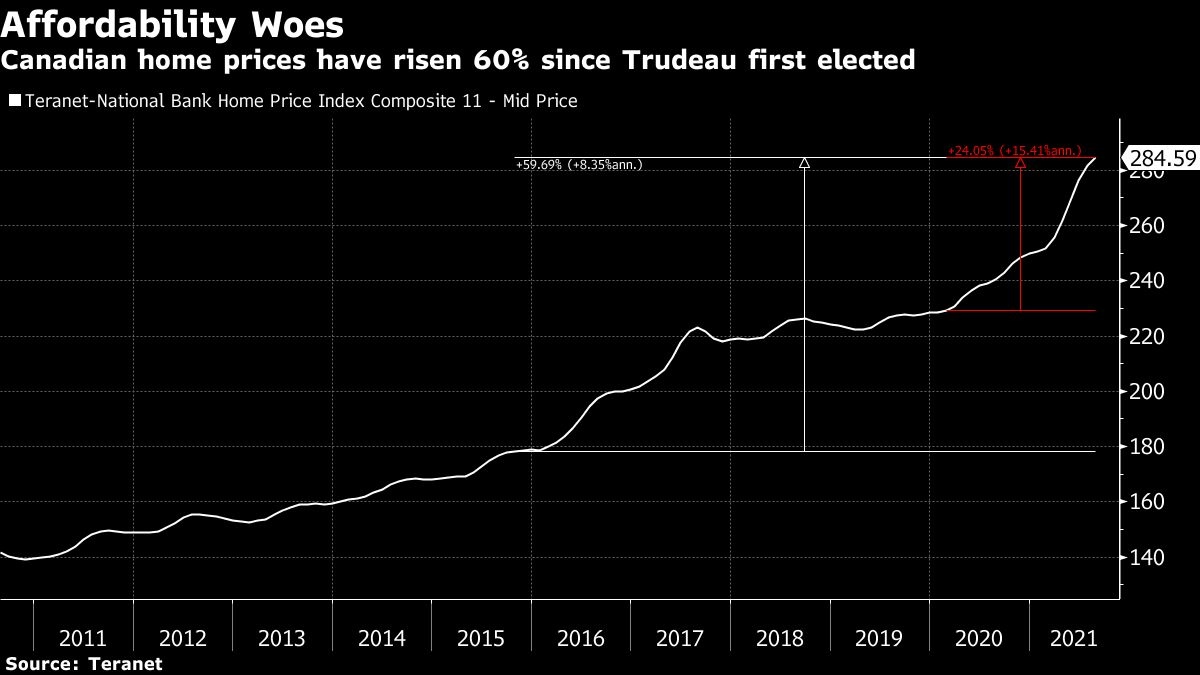 Policies to curb demand -- like a two-year ban on home purchases using foreign money, or a longer-term tax on home ownership by foreigners who don’t live in the country -- aren’t expected to have much impact. Hardly anyone thinks non-Canadians played a big role in the past year’s price surge, given that borders were restricted due to the pandemic.

Lack of supply is the real problem. The Liberals have promised $4 billion in funds cities can access to help build new homes, but only if they tackle obstacles to construction, like restrictive land-use rules.