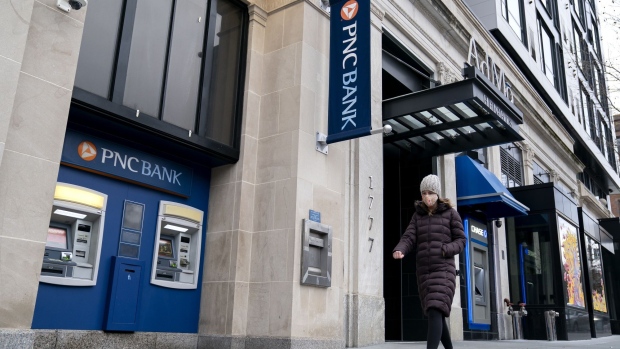 (Bloomberg) -- U.S. regional bank executives say they are optimistic about the nation’s economic recovery and their own prospects for the remainder of the year after reporting strong quarterly earnings, even as they acknowledge that looming inflation is weighing on commercial clients.

As executives reviewed their second-quarter results, they highlighted robust consumer and business spending as an encouraging sign for the economy. Customer credit quality is strong, they said, and the possibility of the Federal Reserve pushing interest rates higher could help boost results.

“We were pleased with the continued rebound in the economy from the pandemic-induced slowdown,” M&T Bank Corp. Chief Financial Officer Darren King said on a conference call with analysts last week. “We continue to see improved customer activity across all sectors of the economy.”

Truist CFO Daryl Bible referred to the bank’s credit-quality statistics as “pristine” in a phone interview. “Credit is good and probably good for a while,” he said.

Loan growth remains elusive among both businesses and consumers, with regional firms for the most part reporting either modest increases in lending or declines. That mirrored the situation at the largest U.S. banks, which have linked sluggish borrowing to government stimulus paid out in response to the pandemic.

That’s not the only similarity between performance at the regionals and their Wall Street counterparts. Dealmakers at smaller lenders were also able to cash in on the flurry of mergers and acquisitions spurred by the recovery.

KeyCorp’s investment-banking and debt-placement fees shot up 39% from the prior year, allowing the firm to reap a record $698 million of net income.

“That’s a very focused business that goes out and grows because of their targeted scale, quarter after quarter, year after year,” KeyCorp Chief Executive Officer Chris Gorman said in a phone interview.

Still, the pace of the economic rebound, coupled with labor-market complications and supply-chain issues inflamed by Covid-19, has affected businesses the nation’s regional lenders count as customers.

And while many see aspects of the inflationary trend as transitory, in line with the Fed’s comments, executives who have been forced to boost pay expect those higher wages to stick around.

“I continue to be very worried about inflation for a number of reasons,” Huntington Bancshares Inc. CEO Steve Steinour said. “The labor-market constraints are very real and the cost of labor increases are meaningful, particularly in our market. That doesn’t recede.”

KeyCorp’s Gorman said wage inflation has forced his bank to make “adjustments,” without offering specifics. The largest investment banks, such as Morgan Stanley and Citigroup Inc., are hiking junior-banker salaries as they try to retain talent amid a revolt against grueling workloads and long hours.

One upside cited by the lenders is that inflation will put pressure on the central bank to increase interest rates, a boon to financial firms that have been suffering under a low-rate regime for quite some time.