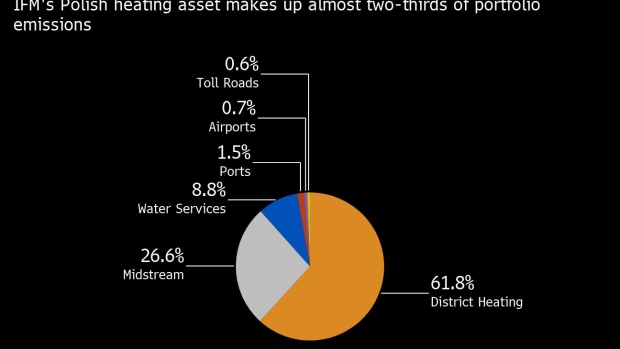 (Bloomberg) -- One of Australia’s biggest infrastructure investors has pledged to almost halve carbon emissions across its portfolio of toll roads, airports and oil pipelines by the end of this decade as the global asset management industry steps up commitments to tackling climate change.

IFM Investors Pty. will exit thermal coal as part of a move to cut at least 1.2 million tons of annual carbon dioxide emissions from its A$75 billion ($56 billion) infrastructure portfolio by 2030, Chief Executive David Neal said. The 40% reduction in emissions from 2019 levels is achievable and consistent with its obligation to limit global warming, he said.

The pledge comes as the world’s biggest pension funds and asset managers accelerate plans to decarbonize the global economy, with scientists warning last month that the planet will warm by 1.5 degrees celsius in the next two decades without drastic moves to stem greenhouse-gas pollution. IFM, which manages A$172 billion across infrastructure, debt, stocks and private equity, said last year it would be carbon neutral by 2050, in line with its Paris Agreement obligations.

“To get to net-zero by 2050, significant emission reductions are needed over the next decade,” Neal said on a call with reporters, adding targets for its other portfolios will be announced “relatively soon.”

To be sure, IFM’s targets only go so far as it focuses on reducing emissions only it can control, rather than also asking its customers to do the same. It’s at odds with the fund’s owners as they pressure the world’s biggest miners like BHP Group and Rio Tinto Group to lay out emissions reductions targets that include their customers, which account for the vast majority of their carbon footprint.

While customer emissions are considered and dictate the transition risk given the impact on the future value of IFM’s assets, “it’s just hard for us to include within the target because we don’t have control and influence,” Neal said. “We would prefer to have specific targets we can commit to achieving ourselves.”

The Melbourne-based fund, which is owned by 23 Australian pensions, will “phase out” thermal coal by 2030 and not make any new bets on assets that get more than 20% of revenue from the fuel, according to the plan. All new investments must be net-zero 2050 aligned and have considered climate change transition and physical risks under a 1.5 degree scenario.

IFM will look to reduce coal usage at Veolia Energia Polska SA -- its biggest emitter -- and shift the business models at assets like Buckeye Partners LP and other U.S. pipelines to transport greener fuels over time, Global Head of Infrastructure Kyle Mangini said.