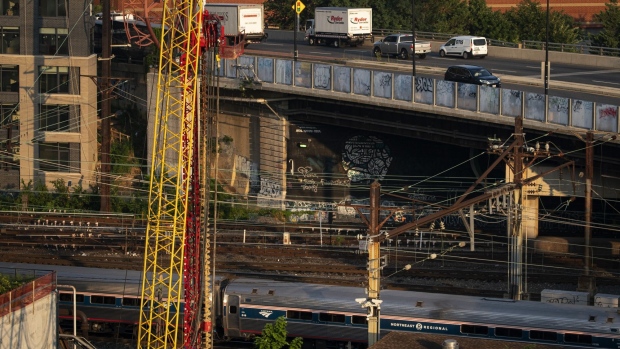 An Amtrak northeast regional train departs Union Station in Washington, D.C., U.S., on Monday, Aug. 2, 2021. The U.S. Senate is heading toward passage this week of a $550 billion infrastructure bill that would provide the biggest infusion of federal spending on public works in decades and mark a major milestone for President Joe Biden’s economic agenda. Photographer: Al Drago/Bloomberg , Bloomberg

(Bloomberg) -- A slow-going Senate debate over a broad $550 billion infrastructure package spilled into Sunday, with lawmakers unable to agree on which final key changes to consider.

Amendments still on the table include proposals for new cryptocurrency rules and flexibility for states and localities that choose to use some unspent pandemic relief funds for roads and bridges.

The infrastructure infusion, a cornerstone of President Joe Biden’s agenda, is on course to clear the chamber. But it hit speed bumps that also included the refusal of at least one Republican senator, Bill Hagerty of Tennessee, to allow the unanimous agreement needed to speed past hours and hours of remaining debate.

Hagerty is among a cluster of Republicans who oppose the bill because it will be followed by a Democratic effort to push through without Senate GOP backing a more expansive $3.5 trillion measure entailing the rest of Biden’s economic agenda.

“I’m not inclined to expedite this process whatsoever,” Hagerty said on Saturday.

The Senate did edge the infrastructure legislation past one of its final procedural hurdles on a 67-27 vote on Saturday, but agreement on a last batch of amendments was elusive. Senators left the Capitol without the expected flurry of votes over final finishes to the bill.

One GOP Senator, John Cornyn of Texas, declared “impasse!” as he left the Senate for the day, although Majority Leader Chuck Schumer said talks would continue overnight and before the Senate reconvenes at noon Sunday.

Senators in both parties were still working late Saturday to resolve a dispute over two dueling amendments to modify a provision dealing with reporting requirements for cryptocurrency transactions and tax collection. The bipartisan group that drew up the legislation was counting on the extra tax revenue generated to help pay for some of the bill’s costs.

Senate Finance Chairman Ron Wyden, a progressive Democrat, teamed up with conservative Republicans Pat Toomey and Cynthia Lummis in working with the cryptocurrency industry to draft changes to narrow those affected by the reporting requirements. It would exclude entities such as miners, software designers and protocol developers from the groups that need to report data to the Internal Revenue Service.

But Senator Rob Portman, a Republican, and Democrats Mark Warner and Kyrsten Sinema -- three key players in negotiating the infrastructure legislation -- proposed an 11th-hour alternative endorsed by the White House. It would target some software companies and cryptocurrency miners.

On Saturday, the sponsors of the competing amendments huddled to discuss a compromise.

“I don’t know how it’s going to work out. We’re working on it,” the Pennsylvania Republican said.

Meanwhile, Cornyn is pressing for the Senate to vote on his amendment that would allow state and local governments to use up to 30% of their unspent Covid relief funds on infrastructure projects. Cornyn said his proposal, sponsored with Democratic Senator Alex Padilla, could free up between $80 billion and $100 billion for projects.

He pleaded with other senators on Saturday to allow consent needed to vote on the proposal considered “non-germane” under Senate rules.

“This money is readily available and does not add to the deficit or debt, but merely provides them with flexibility,” Cornyn said.

Hagerty’s objection to speeding up debate underscored how a single senator can use the chamber’s arcane rules to force the Senate to move at a crawl. He may have another chance to do so beginning Sunday night.

The Senate still has one more procedural vote to wrap up debate and move toward final passage -- but that comes only after another 30 hours of debate unless he along with everyone else agrees to drop that time.

Lack of agreement to move things ahead risks pushing final passage into early Tuesday. After that, Senate Democrats will begin a days-long debate over the fiscal blueprint underpinning the $3.5 trillion economic plan before lawmakers leave for an August recess.

The infrastructure bill includes $110 billion in new spending for roads and bridges, $73 billion for electric grid upgrades, $66 billion for rail and Amtrak, and $65 billion for broadband expansion. It also provides $55 billion for clean drinking water and $39 billion for transit.

The legislation still faces challenges in the House, where Democrats can afford only three defectors if Republicans vote in unison against the bill. Speaker Nancy Pelosi reaffirmed Friday that the House won’t take up the infrastructure legislation until the Senate also passes the more sweeping economic package, a linkage demanded by progressives in the chamber.