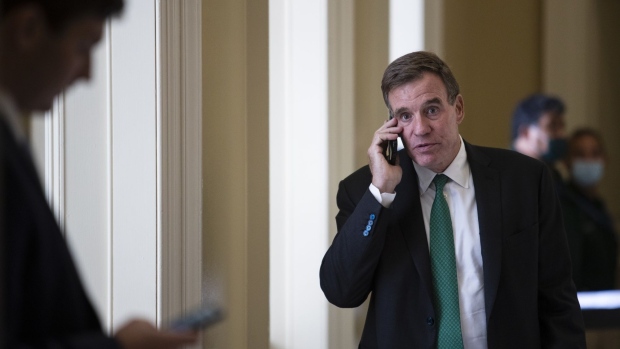 Senator John Thune, a Republican from South Dakota, speaks to members of the media following the weekly Senate Republicans policy luncheon on Capitol Hill in Washington, D.C., U.S., on Tuesday, June 8, 2021. Democratic congressional leaders face a narrowing path to move forward on President Joe Biden's $4 trillion economic agenda without Republican support as negotiations with the GOP are at risk of stalling. , Bloomberg

(Bloomberg) -- A bipartisan Senate group negotiating a $579 billion infrastructure package attempted to resolve all remaining differences by Wednesday with time running out to vote before lawmakers leave town for their August break.

“Everyone is operating in good faith,” Virginia Senator Mark Warner, one of the Democrats involved in the negotiations, said at an event Wednesday sponsored by news outlet Punchbowl. “Time is not on this deal’s side, so we’ve got to get it done.”

Talks continued late Tuesday night between top GOP negotiator Senator Rob Portman of Ohio and Steve Ricchetti, counselor to President Joe Biden, in an attempt to resolve differences over transportation, broadband and accounting for funding, among others. Those disputes have persisted since Biden and the bipartisan group announced on June 24 that they had agreed on the framework for an agreement.

A Republican aide said the group made progress on Tuesday and hopes to announce a deal on Wednesday.

Senate Majority Leader Chuck Schumer of New York has warned that he’ll keep the Senate in session through the weekend if necessary. The Senate is set to begin a recess Aug. 9 and the House is scheduled to leave at the end of this week. By the time Congress returns in late September, lawmakers will be occupied with passing a stopgap bill to keep the government funded and running past the Sept. 30 end of the fiscal year and raising or suspending the U.S. debt ceiling to prevent a government payments default.

One of the main disputes has been over how to divide money from the highway trust fund between roads and transit. Some Republicans have argued that, given the large boost in the bill for transit, future highway trust fund disbursement for that area should be reduced to 18% from 20%. Democrats say the traditional 20% share of the trust fund, which is primarily financed by the gasoline tax, should be maintained.

“Transit is certainly a major issue,” Senator Susan Collins of Maine, one of the GOP members of the group, said Tuesday. “Republicans have made an extraordinarily generous transit offer that, when you add everything together, it’s like an 83% increase -- which is unlike anything we’ve ever seen.”

Another obstacle has been the portion of the package that would expand broadband access. The broadband working group being led by Collins and Democratic Senator Jeanne Shaheen of New Hampshire had agreed to set restrictions on how broadband companies use an Emergency Broadband Benefit government subsidy passed by Congress last December and administered by the Federal Communications Commission, according to a Democratic aide familiar with negotiations.

However, broadband industry lobbying groups have put pressure on lawmakers, calling it rate regulation. That caused some pushback against the restriction from Republicans in the broader infrastructure negotiation group, the aide said.

South Dakota Senator John Thune, the chamber’s second-ranking Republican, said the issues being raised on broadband have led to “a good amount of consternation among our members, but I think those are all fixable.”

The Senate this week also has to deal with a more than $2 billion emergency spending bill to pay for security costs at the U.S. Capitol stemming from the Jan. 6 riot by supporters of former President Donald Trump and resettling Afghan nationals who assisted American forces. It has to pass the House and Senate by the end of the week to prevent cutbacks for both the Capitol Police and the National Guard. It would take just one senator’s objection to slow down consideration of the bill for days, however.