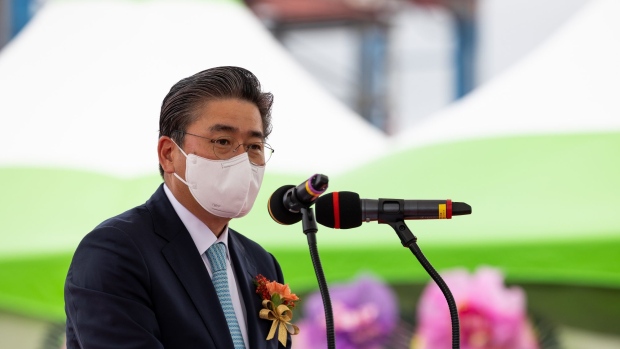 A wind turbine on the Multi-purpose Mobile Base in Gunsan, South Korea. Photographer: SeongJoon Cho/Bloomberg , Bloomberg

(Bloomberg) -- It’s getting faster and cheaper to embed a wind tower the size of the Washington Monument into the sea floor.

South Korea is cutting the time it takes to construct and install an offshore turbine, from as long as three months to just a matter of days, thanks to a large flat-bottomed ship for hauling the structure and a “bucket suction” method for affixing it. The innovations could chop an estimated $3 million from the process.

State-owned utility Korea Electric Power Corp. on Wednesday showcased what it says is the first vessel that can haul a fully constructed wind plant. A crane on the 1,500 ton ship, known as a multipurpose mobile base, or MMB, lifted a 140-meter-high (459 feet) wind tower built in the water near the western port of Gunsan.

“Through using the MMB technology, we should be able to tackle our 2050 carbon neutrality goal and make a huge contribution to wind power, which is the core element in the nation’s transition,” Kepco Chief Executive Officer Cheong Seung-il said at the event.

Innovations to cut costs and installation times promise to help spur a global expansion of offshore wind power that’s already forecast to deliver an 11-fold increase in capacity through 2035, according to BloombergNEF. Annual installations are expected to rise to a record 11 gigawatts this year and hit 32.5 gigawatts by the end of the decade, as nations add more renewable energy to phase out fossil fuels and curb carbon emissions.

China, which will account for almost three-quarters of installations this year, and nascent markets across Asia like Japan, Taiwan and Vietnam, will support that growth outlook, BNEF said in a report last month.

The sea offers one of the best prospects for green energy in South Korea, where the climate and topography are ill-suited for large solar and onshore wind plants, and conventional hydropower resources are almost fully utilized. The country is seeking to add 12 gigawatts of offshore wind by 2030, compared with less than 0.2 gigawatts now.

Kepco is crunching down the 90-day period it can take in some circumstance to build and place an offshore wind turbine. The company can put together a plant onshore in seven days, and the MMB will then ship it to the offshore location. Hauling the entire plant significantly reduces the time and cost of having to make several trips to deliver parts.

The new process would lower the cost of installing a 5-megawatt turbine by 43%, or 3.7 billion won ($3.3 million), according to a statement from Kepco.

The company is looking to increase the size of MMBs to carry up to 14-megawatt turbines that are being rolled out in Europe, according to Ryu Moo Sung, principal researcher at Kepco Research Institute. He said Germany’s RWE AG and Spain’s Ocean Winds have shown an interest in Kepco’s vessels.

Once the MMB is at the offshore site, it takes up to 12 hours to fix the tower to the ocean floor using a “suction bucket” technique. The method pumps water out of the buckets, creating pressure to force them into the floor. The southwest coast of South Korea is ideal for this technique because of the soft seabed.

The new process is an improvement over traditional methods, which can create environmental problems as cement is injected into the sea floor to build a foundation, Kepco said. In addition, offshore construction is vulnerable to delays caused by inclement weather, which can further raise costs.

The time it takes to install an offshore turbine has been steadily decreasing, with the pace twice as fast as 10 years ago, according to a BNEF report in 2019. In the U.S., the Department of Energy and partners including the University of Delaware have also worked on accelerating the construction of offshore wind farms using suction bucket technology.