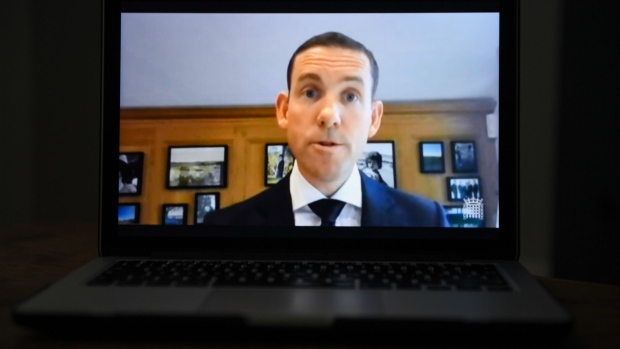 Lex Greensill, chief executive officer of Greensill Capital, gives evidence during a live steam of a Treasury Select Committee hearing into the collapse of his company, on a laptop screen arranged in London, U.K., on Tuesday, May 11, 2021. Greensill Capital collapsed in March in one of the most spectacular financial blow-ups of recent years, sending shock waves through a Swiss banking giant, two of Japan’s largest firms and a British tycoon’s industrial empire. , Bloomberg

(Bloomberg) -- Financier Lex Greensill had “extraordinarily privileged” access to the U.K. government and his role as an adviser at the center of power gave him a “marketing platform” for his own business, an inquiry has found.

A review of Greensill’s connections to the U.K. government -- led by independent consultant Nigel Boardman and published on Thursday -- will make uncomfortable reading for some of the officials and politicians involved.

Boardman criticized the way officials running the government handled potential conflicts of interest involving Greensill, who advised Prime Minister David Cameron and his government on supply chain finance while setting up his own firm in the same sector.

Jeremy Heywood, the former official whom Boardman said drove the decision to bring Greensill into government, died in 2018 and therefore couldn’t explain his actions to the inquiry.

Cameron, who resigned from government in 2016 and later went on to work for Greensill Capital, understated his role with the firm when he lobbied the government last year, Boardman said.

Boardman said he will later make recommendations on how to improve current rules, but found lobbying safeguards already in place worked well to stop Cameron and Greensill getting what they wanted. The government said it will study Boardman’s findings carefully before responding.

Cameron ultimately failed to persuade ministers to include Greensill in a state-backed Covid lending program. But the collapse of the company put pressure on senior members of Boris Johnson’s government to explain whether they did the former premier any special favors.

Johnson asked Boardman to review Greensill’s involvement with government, first as an adviser on supply chain finance during Cameron’s tenure, and later the efforts by Cameron and others to lobby ministers and officials.

Cameron Slammed for ‘Lack of Judgment’ Over Greensill Lobbying

In part one of his report, Boardman set out the facts he’d pieced together of what happened almost a decade ago when Greensill came into government.

“It is clear from the evidence that I have reviewed that Mr Greensill had a privileged – and sometimes extraordinarily privileged - relationship with government,” Boardman said in his report.

Greensill was allowed to work in government in 2012 without having been given security clearance. The process surrounding his appointment -- which was driven by Heywood, a former Morgan Stanley colleague -- was unclear, Boardman said.

Greensill was given two sets of IT and security access for the Cabinet Office and, with Heywood’s support, the prime minister’s office at 10 Downing Street. Boardman said no minutes could be found recording a meeting at which ministers approved Greensill’s reappointment to his role, after an initial three-month period.

Greensill gained access, through Heywood’s introductions, to several government departments and was also able to “leverage his position, using the facilities of Number 10, to hold meetings with major companies,” Boardman said.

While working in government, Greensill took on two companies as customers of his business -- Vodafone and Carillion, although Greensill Capital did not eventually contract with Carillion.

This “level of access and the status he derived from it” mattered to Greensill because he was building a supply chain finance business at the time, and was in competition with major international banks, the report said.

“Mr Greensill’s role in government had the consequence of providing him with a marketing platform for Greensill Capital’s business with the private sector. This enabled Mr Greensill to promote a product which did not, in fact, provide material benefits to government,” Boardman said.