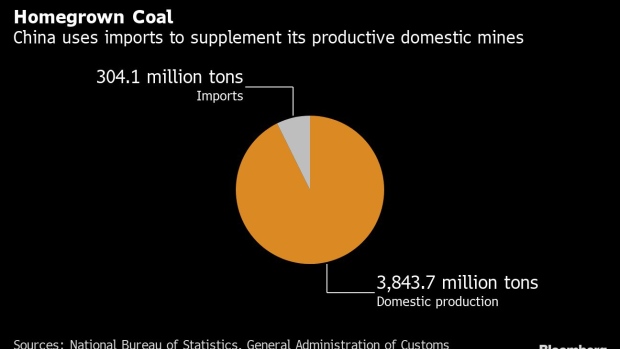 (Bloomberg) -- Drones buzz above traffic-clogged roads in Ordos, Inner Mongolia, as white-capped police officers attempt to manage lines of hundreds of trucks waiting to be loaded with cargoes of coal. Many have been there for days.

The jams disrupting the Chinese city, one of the most critical coal hubs anywhere, show the enormous task facing the world’s top energy consumer as it races to ease a power crisis that’s stifling key industries and that some economists warn risks crimping global growth.

For more than a month, energy shortages have rippled through China’s manufacturing centers for steel, aluminum and cement, and prices of coal — which the country relies on for almost two-thirds of its electricity — have made dizzying gains. As the approaching winter threatens to ratchet up demand, authorities are taking extraordinary steps to intervene.

These include reversing recent moves towards cleaner energy and better safety standards by reviving old and dirty coal mines; scrapping rules intended to keep power prices in check for industrial consumers; and considering increasing imports of foreign fuel at a time when trade relations with countries like Australia and the U.S. remain frayed. Yet even these measures look unlikely to be drastic enough.

Read More: Why China Is Facing a Power Crunch and What It Means

China’s government has also ordered coal miners to spare no expense in boosting output, calling on the sector to deliver over 12 million tons of the fuel a day in the final three months — the equivalent of additional 100 million tons, roughly what commodities giant Glencore Plc produces in a year.

Missing that target may have ramifications far beyond Beijing.

“China could see its worst winter power shortage since 2010,” said Citigroup analyst Tracy Liao. “This would increase stagflation risks and growth pressure on the Chinese and the global economy over the coming winter, push energy prices higher and propel large-scale curtailments in commodity downstream sectors.”

Interviews with coal traders, mine engineers and officials, all of whom requested anonymity in discussing private details of their work, underscore the scale of China’s challenge. The country must fix its energy supply crunch, curb wild price gains — and keep its longer-term climate goals on track.

China’s National Development and Reform Commission and the General Administration of Customs didn’t immediately respond to a faxed request for comment.

It’s hard to overstate the squeeze on supply. Senior managers from State Power Investment Corp., one of the country’s largest power firms, and representatives from southern Guizhou province met late last month with key coal supplier China Shenhua Energy Co. A request for 3 million tons of the fuel ended with an agreement for only an additional 30,000 tons. The miner simply couldn’t guarantee production would rise enough to offer more, according to people familiar with the discussions. SPIC, China Shenhua and the Guizhou Development and Reform Commission didn’t immediately respond to a request for comment.

Managers of power firms in other regions have raced between mines to secure supply, and to meet a government directive ordering coal-fired plants to keep more than seven days of fuel on hand. Even those prepared to accept eye-watering prices have been left frustrated. There is simply not enough coal to go around, they have been told.

The lurch to burn more coal comes despite President Xi Jinping’s commitment to reduce China’s consumption of the most-polluting fossil fuel from 2026. The nation was the only major polluter to record higher emissions in 2020 than a year earlier, and that annual volume is expected to rise again. It’s an awkward reality with global climate talks scheduled to open in the coming days.

In Inner Mongolia, expansions for more than 70 coal mines were approved this month, with authorities demanding that work be completed before November. Tasks that would ordinarily take months must now be condensed into a few weeks, according to staff. These jobs include planning how to add more capacity without risking damaging rock slides at the largely open-cut pits.

Some industry executives warn the push to produce more is likely to cost lives. One factor that slowed Chinese supply earlier in the year was stricter safety standards following a series of mining fatalities.

Even modern underground operations are encountering difficulties. Opening up fresh areas below the surface needs careful preparation to ensure safety and mine planning, while practical steps like adding cabling for electricity supply also take time.

“We would see risks in achieving this target in time for peak winter demand,” said Marius van Straaten, an analyst at Morgan Stanley. “We do not believe that China’s coal shortage will significantly ease over the winter months.”

There are early signs that the measures are having some impact. In Ordos, production has jumped about 11% from last month and on some recent days the region has yielded more than any other global coal hub. Idled mines are restarting in a matter of weeks not months, and some sites will be able to tap unused capacity to boost production quickly, said Yu Zhai, a coal analyst with Wood Mackenzie Ltd.

More than 20 regions, accounting for about two-thirds of China’s gross domestic product, have imposed curbs on power supply in recent weeks.  Actions to lift supply and restrict heavy energy consumers mean that only Liaoning and Zhejiang provinces were encountering significant shortages by mid-October, from about 18 two weeks earlier, according to BloombergNEF. Still, January is typically the month when China’s power sector comes under most strain.

Coal output still needs to rise faster to keep pace with demand. Some in the industry have estimated the gap between coal demand and supply in China for the full year will be between 350 million and 400 million tons.

Imports from Indonesia are rising and some observers expect higher flows from Mongolia. Some Chinese officials have proposed lifting a ban on new imports of Australian coal, although that prospect hasn’t yet won support from senior policymakers. Ties between Australia and China have soured dramatically in recent years, prompting new restrictions on trade in commodities.

In any case, foreign coal accounts for only a fraction of China’s demand. Imports totaled about 304 million tons last year, compared to local output of about 3.8 billion tons.

That means restrictions on energy-intensive industries will continue, Wood Mackenzie’s Yu said. Output from sectors like steel and cement could decline 30% through the end of the year, according to UBS Group AG.

Higher electricity prices are also hitting heavy industry. Guangxi province is adding a 50% premium for its top-consuming industries, which include production of alumina and aluminum. Broader price reforms have pushed up prices in Shandong and Jiangsu by about 20%.

“With a 50% increase, I believe demand for energy-intensive industries goes down immediately,” Lin Boqiang, dean of the China Institute for Studies in Energy Policy at Xiamen University, and a consultative member of the National Energy Committee, told a Credit Suisse Group AG conference Wednesday. “With the tariff increases, China can address its power shortage very quickly.”

Action to cool coal’s price rally is having only mixed success, even after China’s Vice Premier Han Zheng this week vowed “powerful measures” against speculation and hoarding in the energy sector.

Coal futures have begun to tumble, after prices surged from the equivalent of $131 a ton in early September to more than $300 earlier this week. Physical cargoes, however, remain at a record high and prices are unlikely to waver while shortages persist, according to traders. Efforts by some provinces to cap coal prices are also having little impact.

That leaves China’s energy crisis in the hands of the miners racing to dig up more coal. And La Nina is expected to bring a brutally cold winter likely to undo some of the gains made so far.

Even as trucks lined up at Inner Mongolia’s mines, workers in other parts of the region were turning on the central heating in homes and offices days earlier than expected as snow descended onto the arid plains.