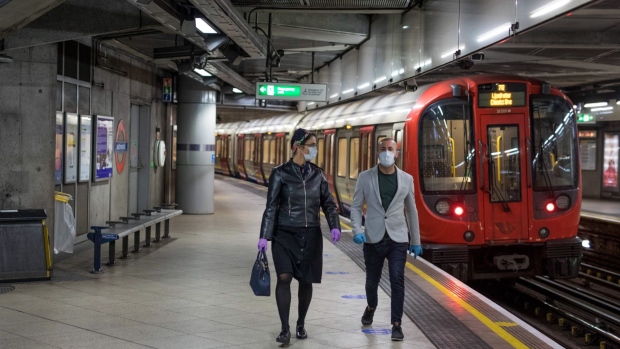 (Bloomberg) -- As Boris Johnson battled for survival, his senior officials hunkered down in 10 Downing Street trying to decide who would lose their job so the U.K. prime minister can keep his.

According to people familiar with the matter, the revelations of apparently rule-breaking lockdown parties at Johnson’s office have triggered a blame game among the team who work at No. 10, the prime minister’s official residence and the heart of his administration.

A respectable performance in the House of Commons on Wednesday buoyed the spirits in No. 10 and bought Johnson some respite. But he remains in desperate jeopardy, with his top team war-gaming their response to a report due next week on the Downing Street parties.

Some of the senior staff are plotting a shakeout they hope will help the prime minister to ride out the storm, while chief whip Mark Spencer could be another casualty, as some lawmakers blaming him for the breakdown in party discipline.

Whether a sacrificial lamb will be enough to appease the furious British public, the revelations have broken something vital at the heart of Johnson’s administration. He could yet struggle on for some time, but the confident figure of the fall, who was talked of as Britain’s leader for a decade, seems a distant memory.

It’s not just that a clearout of senior advisers will leave Johnson casting around for a third team in two years to run the country. The humiliation his staff have suffered has damaged the unwritten rules that bind a prime minister’s team together.

One former aide who was there in 2020 described it as the “One No. 10 Approach”: what happens in Downing Street, stays in Downing Street. Yet Johnson has been brought to the brink by a torrent of leaks from his inner circle which have horrified the public and stirred up rebellion in his party.

Bloomberg spoke to multiple current and former officials from No. 10 and the Cabinet Office to piece together how that happened. They all asked not to be named discussing events inside the prime minister’s official residence. No. 10 spokespeople declined to comment on this story.

No. 10 staff tend to consider themselves the elite. The place is populated by PhDs, senior civil servants and high-powered advisers parachuted in from the private sector. They handle state secrets, work brutal hours and take life-or-death decisions daily. Those unique pressures and responsibilities help to bind the team together.

The nature of the work, one former official said, also means that they aren’t used to facing scrutiny.

Most leaders of course cultivate a tight inner circle and when things go wrong their aides can fall out over who’s to blame. But Johnson’s administration went further. His freewheeling style encouraged particularly informal relationships, dispensing with some of the conventions that helped to maintain a professional environment.

Some of his close staff referred to No. 10 as “the house,” in a reflection of the family atmosphere, one former official said. Another person recalled how early in his tenure, the prime minister asked staff, “Should we get a dog?”

The person was surprised by the “we,” implying that the dog would somehow be part of both Johnson’s family, and his team.

Deliberately or not, the prime minister was breaking down the separation between his government life and his domestic life, between what would much later, much more famously, be termed “work meetings” and “social events.”

Even then, one senior official was uneasy, scolding staff who addressed the prime minister as “Boris.”

The pressures of the first lockdown accentuated all that.

By May 2020, when the prime minister had banned all social gatherings, they had been through the fire together.

The prime minister himself had nearly died from Covid. Many others had also been infected. Those who hadn’t were resigned to the idea that they would catch it, said one person.

The suggestion was that a sense of fatalism made the ban on social gatherings seem pointless for those hunkered down in No. 10.

They’d often arrive by 7:30 a.m. and stay until late, one former official said. They traveled in on empty trains and walked through deserted streets to the one building in government that still hummed with activity. They felt shut off from the world, one said.

Some staff came back to work when they were still suffering the after effects of the disease. Everyone was exhausted. People were just trying to get through.

When Johnson was isolating he kept his office door propped open so staff could talk to him. Two chairs placed across the entry signaled to aides to keep out. When confined to his flat, they struggled with zoom calls because aides could hear the prime minister’s voice through the wall.

There had always been drinking in Johnson’s No. 10, the people said. One former staffer said there was a culture of long sessions, and another recalled the press team’s “wine o’clock.”

During lockdown, there was nowhere else to get a drink at the end of the day and across the country, lots of people were drinking more.

One person described empty bottles lying around the open-plan offices that would have made the drinking culture obvious to any observer, including the prime minister. From Johnson’s apartment in No. 11, colleagues could be seen spilling out onto the terrace for meetings.

On May 20, Martin Reynolds, a senior adviser, sent an email to the team. “Hi all,” he began. “After what has been an incredibly busy period we thought it would be nice to make the most of this lovely weather and have some socially distanced drinks in the No. 10 garden.”

There’s that “we” again. The Downing Street family. When Johnson used it he meant him and his team. It’s up to the investigating civil servant Sue Gray to work out who else, other than Reynolds, thought a gathering would be nice.

Johnson says he attended for 25 minutes and “implicitly” understood it was a work event. He says he never received Reynolds’ invitation and has denied the allegation from his former adviser, Dominic Cummings, that he was warned the “bring your own booze” event breached regulations.

“Nobody told me and nobody said this was something that was against the rules,” Johnson said on Tuesday in a pooled interview.

Cummings has been lobbing bombs at Johnson and his team since he was fired in November 2020. But things only started to unravel a year later with the first report of a Downing Street lockdown party.

The stream of revelations since then suggests it’s far more than one embittered ex-staffer who is leaking. There was the Christmas party, the leaving parties, the jokes about parties and the parties before Prince Philip’s funeral.

It’s usually a source of pride to work at No. 10, the pinnacle of most people’s careers. But working under Johnson has become a source of shame.

During the most intense parts of the pandemic, the pressure and the camaraderie led some advisers to do things that they now say were wrong. As public outrage has grown, the desire to speak out, either on or off the record, has become more powerful than the bonds of loyalty that previously kept them quiet.

Allegra Stratton quit with a tearful apology after a video was leaked that showed her mocking the idea the parties were work events. Former head of the Covid taskforce Kate Josephs apologized too and is under pressure to leave her new job running Sheffield City Council. Another insider described the day the funeral story broke as the worst of their working life. Johnson’s office even apologized to the Queen.

Those that are left are asking who will be next to carry the can. One senior official is stress-eating and the prime minister is awaiting the Gray’s verdict. A report which could prompt more Tories to turn against.

There was a time, a few weeks ago, when an apology from the prime minister would most likely have put this issue to bed, one staffer said. He could have rapped the knuckles of his staff and lauded them for their work, and the public would have accepted it.

But that moment has gone now.