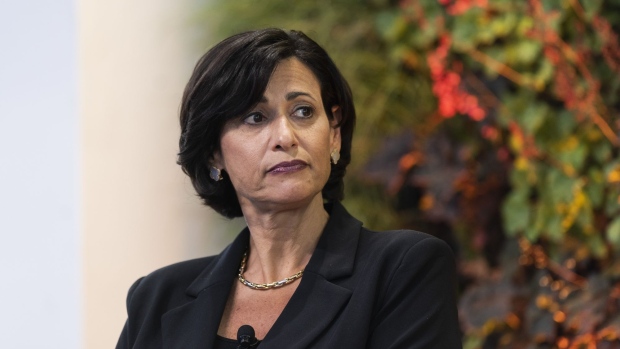 Rochelle Walensky, Director of the U.S. Centers for Disease Control and Prevention (CDC), participates in a panel discussion during the Milken Institute Global Conference in Beverly Hills, California, U.S., on Wednesday, May 4, 2022. The event convenes the best minds in the world to tackle its most urgent challenges and to help realize its most exciting opportunities. , Bloomberg

(Bloomberg) -- An internal review by the US Centers for Disease Control and Prevention has uncovered deep concerns among current and former employees and other federal health officials about its urgency, responsiveness and culture, according to interviews with more than half a dozen people involved in the process.

Findings from the review announced last month, some of which could be released in coming weeks, may give CDC Director Rochelle Walensky momentum to usher in change at an agency that’s been criticized by members of Congress, prominent health experts and local public officials for not having the tools and culture needed to respond effectively to a pandemic that’s resulted in one million American deaths.

One part of the review meant to look at how the agency performed during Covid-19 is being led by longtime Health and Human Services Department official James Macrae, who for the last month has interviewed people who work at or alongside the Atlanta-based CDC. Other aspects of the review are scrutinizing the agency’s wider operations and capabilities.

Bloomberg spoke to more than half a dozen people who have met with Macrae, both from inside the CDC and from other parts of government that work with the agency. Many raised longstanding frustrations with how the health agency operates. Most spoke on condition of anonymity because the work is ongoing.

“It’s clear that this review is not attempting to be a soup to nuts overall review, but to focus practically on what can be done in the near term to strengthen CDC and the response to Covid,” said Tom Frieden, the director of the agency from 2009 to 2017. Frieden, now CEO of the public-health advocacy group Resolve to Save Live, said he met with Macrae.

Several said the agency needs to reform its byzantine and restrictive fiscal structure, which contains more than 150 detailed budget line-items that strictly direct spending of the agency’s about $8.5 billion budget on different cancers, chronic diseases and other priorities — money that can’t be quickly moved to new priorities, such as during a pandemic emergency. Other agencies have far more flexibility.

Many of those consulted in the review also lamented the CDC’s data capabilities. Several inside the CDC said the agency needs more authority to procure data from local governments and health-care providers, and better tools to quickly analyze it. The agency is highly dependent on voluntary cooperation from state and local health departments, and has been stymied by outdated technology and a lack of standards across those local groups.

Almost all of the people who said they took part in the review said they discussed the agency’s culture – long thought of as too insular, academic, and uncomfortable with the rapid-response, hands-on approach needed in a national emergency. Macrae’s conversations have also focused on how the agency can more quickly turn around its scientific research and get it into the hands of the public, a process that can often get bogged down in lengthy reviews, said several of the people.

“Fundamentally, CDC is underfunded, underpowered, and misunderstood,” Frieden said of the review. “This is not a gotcha exercise,” he said of the effort.

The review comes after criticism spanning both the Biden and Trump administrations that the agency moved too slowly, failed to communicate effectively with the public, and often lacked the ability to collect and analyze large tranches of data to make rapid decisions in the face of a fast-evolving pandemic.

Macrae, 57, is a three-decade career staffer who works in the Department of Health and Human Services’ Health Resources and Services Administration and oversees a more than $5 billion primary-care program. One senior CDC official said that he is running his portion of the review as a one-man shop, meeting with people over phone and video conference in lengthy interviews. In some cases, he’s sat in on agency meetings as an observer, said the senior CDC official.

Several of the people interviewed said he was focused on changes that could be achieved in the near term, rather than feedback for any wholesale overhaul that could take years. Many of his questions were open-ended, such as asking people, “Is the CDC willing to change?” and “Who does the CDC serve?”

It’s not clear how the review results will be presented and how extensively they’ll be made public, though the agency could give an interim update in the near future, said the CDC senior official. Macrae’s office declined to make him available for an interview.

Walensky’s review announcement also set off a hurried effort to be included by government officials who are outside the agency, but who have worked closely on the pandemic response.

In one meeting with a group of non-CDC health officials who sought out Macrae and had an hour-long conversation, Macrae asked them what they thought CDC could do better, but shied away from a robust accounting of what went wrong during the pandemic, said a person familiar with the conversation, who asked not to be named as the details of the call were private. Macrae asked what their experiences were, and "what worked, and what didn't."

In other conversations with Macrae, the CDC’s internal culture has come up repeatedly. Many of the people who spoke with Bloomberg said there has long been a discomfort among many at the agency with the type of real-time analysis asked for by others in government during an emergency.

One person not directly involved in the review but familiar with its work said the university-like culture at the agency meant that staff experts and leaders tended to favor work that met an “A+” bar suitable for academic publication, but that often took days or weeks to turn around. There was far less comfort, said the person, with the sort of “B+, but I need it immediately, and tell me the limitations,” analysis that’s required in a crisis.

“It’s a real issue, and I think it relates to not having as much practical experience,” said Frieden, the former director. “What I would find is that the White House would ask a question, and eight days later you’d get this beautiful response, but the White House needed it in 15 minutes.”

Frieden suggested that the agency needs to deploy thousands of its staff out to state and local health departments, helping bolster local officials while also giving CDC workers more hands-on experience. After a several-year rotation, they would come back to the agency.

He also echoed the comments of many others who said that the agency’s financial structure makes it almost impossible to quickly reallocate resources. The agency itself proposed such a change in its fiscal 2023 budget, saying that because the agency’s funding was stuck in too many separate accounts, it “cannot efficiently access or utilize agency resources, especially its most valuable resource—its people—to meet the urgent need.”