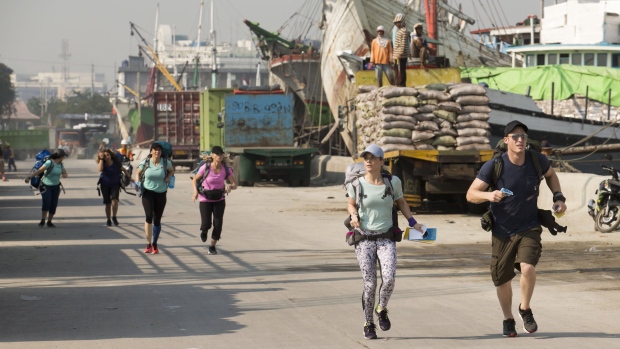 Competitors from the television show The Amazing Race Canada: Heroes Edition are shown in a handout photo. , THE CANADIAN PRESS/HO-Bell Media-Mark O'Neill

A news release says law firm Cavalluzzo LLP filed the suit in an Ontario court on Friday against Insight Productions.

The company has worked on series including "The Amazing Race Canada," "Big Brother Canada" and "Battle of the Blades."

CWA/SCA Canada says it and fellow union IATSE support the suit, which is seeking damages on behalf of independent contractors and current and former employees.

The suit claims Insight owes hundreds of workers unpaid overtime, vacation pay, and holiday premiums because of contracts that did not comply with Ontario's Employment Standards Act. The allegations have not been proven in court.

Insight Productions says the proceedings initiated against it are "without merit" and the company will "vigorously defend" itself against the allegations.

"Insight is immensely proud of the people who work with us to produce some of the most popular television shows in Canada," John Brunton, CEO and executive producer of Insight Productions, said Monday in a statement.

"We strive to be a leader in our industry in every way. This includes attracting top talent to our productions by offering good compensation, safe and fair working conditions, and opportunities for mentorship and career development.

"We are confident that the professionals that work with us feel valued, respected and fairly compensated. Insight prides itself on its positive workplace culture, which we believe is a fundamental reason we are able to attract and retain the very best talent to our productions year after year."

This is the second class-action lawsuit against a Toronto-based reality TV production company in the past year and a half.

In October 2018, a similar suit was filed against Cineflix Productions, which is behind "Property Brothers" and dozens of other TV programs.

That suit is still before the courts and is claimed on behalf of contract production personnel.

It claims Cineflix and its affiliates violated the Ontario Employment Standards Act and seeks compensation for all past, present and future personnel in certain job classifications as far back as 2000. The allegations have not been proven in court.

"Cineflix has demonstrated a solid history of ethical standards and respect for the creative community for over 20 years," spokeswoman Vanessa Marra said at the time the suit was launched. "Cineflix will be vigorously contesting this claim."

A lawyer at Cavalluzzo said after the Cineflix lawsuit was filed, the firm heard "similar complaints about Insight."

"We heard about very long workdays, six- and seven-day workweeks with no overtime, and no extra pay for holidays," Sean Fitzpatrick said in a statement. "We are putting the reality/factual TV industry on notice that it can no longer deny workers their basic employment rights."