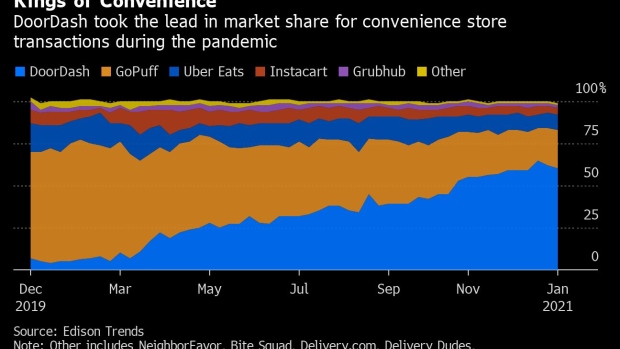 (Bloomberg) -- Instacart Inc. is expanding its delivery partnership with 7-Eleven Inc. in a bid to capture share of a fast-growing convenience store market dominated by DoorDash Inc.

The San Francisco-based company is adding 4,000 7-Eleven locations, bringing the total to 6,000 stores in 33 states and Washington. D.C., and pledges to get deliveries to customers in as little as 30 minutes.

“Sometimes people need a full fridge and pantry restock and other times they just need a few things quickly like some snacks for the kids, a bottle of wine for dinner or over-the-counter medication to nurse a headache,” said Instacart vice president of retail Chris Rogers.

Instacart has fallen behind DoorDash, which began partnering with convenience stores last April, and Uber Technologies Inc., which recently teamed up with SoftBank Group Corp.-backed GoPuff to offer a larger inventory of convenience and grocery store items. GoPuff commanded the vast majority of the convenience market prior to the pandemic and lost its lead when DoorDash launched its virtual convenience store DashMart last summer.

Instacart is the largest pure-play online grocery delivery company in the U.S., with 47% of the market as of March, according to Bloomberg Second Measure data. The company has been mulling an initial public offering this year and announced a $265 million funding round in March that valued the company at $39 billion.