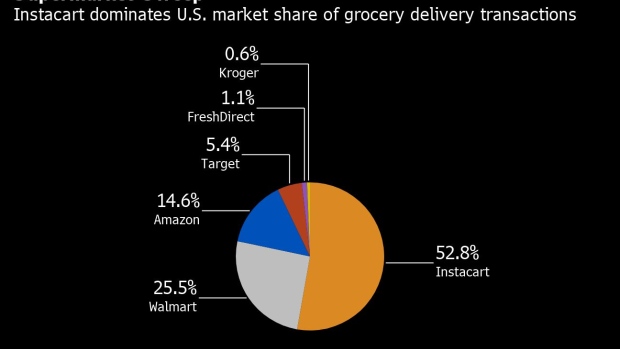 (Bloomberg) -- Instacart Inc. is launching a service offering prepared foods from supermarkets in a bid to capture more customers and better compete in the hot market for meal-delivery.

Customers will be able to choose from hundreds of ready-to-eat meals, such as rotisserie chicken, sushi and soups, from grocery stores including Kroger, Publix and Ahold Delhaize’s Stop & Shop. Shoppers will also be able to tack on a few grocery items to complement their meal. The service, which promises delivery in 30 minutes, will be available at 4,100 stores in 35 states, the San Francisco-based startup said on Thursday.

“Ready-made meals are not necessarily something people would think to come to Instacart for, and grocery stores have not had an easy time at reaching customers online in this area,” said Daniel Danker, Instacart’s head of product, in an interview.

Competition in grocery delivery has intensified over the past year with DoorDash Inc. and Uber Technologies Inc. stepping up efforts to challenge Instacart’s stronghold in the U.S.

Demand for grocery and food-delivery alike has largely remained resilient even as pandemic conditions have ebbed. Companies have been jockeying to cater to consumers’ insatiable appetite for convenience by promising faster service and expanding into non-food categories like alcohol.

Instacart’s average order values are typically 3 to 4 times larger than Uber and DoorDash’s, according to market research firm YipitData. This is because customers spend more on stocking up pantries than on individual takeout meals. However, Instacart’s customers also order less frequently.

When asked whether Instacart would ever offer delivery from restaurants, Danker said the company is focused on being a partner to grocery stores. He added that the new ready-made meal offering is a new approach, rather than tapping entrenched behaviors in meal-delivery. “This is cheaper, healthier and fresh. We’re calling it a breakup with takeout.”

Instacart’s average order values have seen a steady decline and were about 15% lower in November than the year earlier, YipitData show. The company has pushed into other categories, like virtual convenience stores, to tap new sources of growth. Instacart’s sales grew by 30% in 2021 compared with the year earlier, Danker said without providing exact figures.