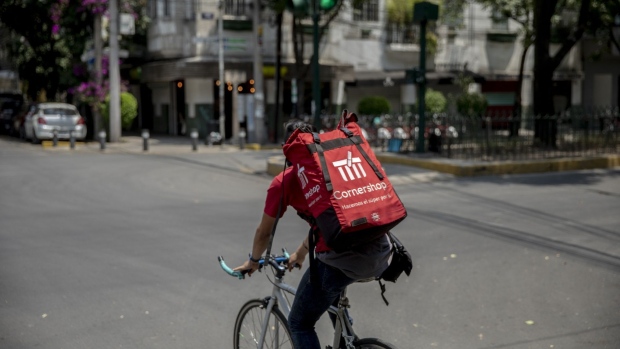 A worker rides a bicycle while making a Cornershop app delivery in Mexico City, Mexico, on Friday, April 3, 2020. As the coronavirus pandemic strangles economies and throws people out of work, food delivery drivers are competing for orders. , Bloomberg

The lawsuit, filed in Texas, said Cornershop stole thousands of images from Instacart’s systems. Uber said it was buying a majority stake in Santiago-based Cornershop last year as part of a broader push into grocery delivery in various countries, including plans for the U.S. this month.

“Instacart is facing a new challenge in the U.S. from a Chilean upstart, and it’s unfortunate that their first move is litigation instead of competition,” a spokesman for Uber wrote in an emailed statement. “Cornershop will be responding to this complaint but won’t be deterred in bringing grocery delivery to more customers in the U.S.”

The coronavirus pandemic is driving a surge in demand for groceries and other food delivered to the home. Instacart has said it’s on track to process more than US$35 billion in grocery sales this year. Meanwhile, the effects of the virus gutted Uber’s ride-hailing business, prompting the company to turn more of its focus to delivery. Uber said last week it’s acquiring another delivery company, Postmates Inc., for US$2.65 billion.

Instacart claimed Cornershop stole copyrighted images and modified the file names in order to conceal the alleged theft. Instacart also said Cornershop posted job listings for software engineers with “advanced scraping” and other skills indicating that taking and reusing content is part of a company-mandated effort, according to the complaint.