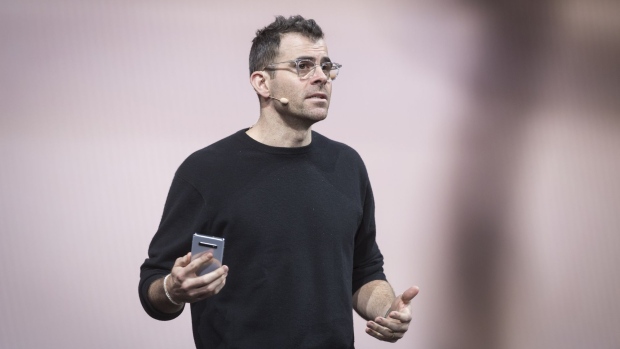 Facebook Inc.s Instagram application is displayed in the App Store on an Apple Inc. iPhone in an arranged photograph taken in Arlington, Virginia, U.S. on Monday, April 29, 2019. Facebook's sales gains are increasingly being driven by photo-sharing app Instagram and advertising in its Stories feature, a Snapchat copycat. Photographer: Andrew Harrer/Bloomberg , Bloomberg

(Bloomberg) -- Instagram is willing to pick up the tab for some celebrities’ video production costs. As long as they don’t film anything about politics or elections.

Anyone who gets Instagram money to produce content for IGTV, the app’s hub for longer videos, “must not include content about social issues, elections or politics,” according to a contract distributed by the company to creators and agents. Bloomberg News obtained a copy of the document.

The clause has alarmed some of the influencers and creators who have been approached about posting clips on IGTV, according to a person familiar with the situation. They asked not to be identified discussing private negotiations.

That’s a stark contrast to its parent company Facebook Inc., which has vigorously defended political speech online. Facebook has been under intense criticism for letting politicians lie in advertisements on the social network. Chief Executive Officer Mark Zuckerberg argued that free speech and political debate are too important to fact check political ads. Instagram’s IGTV contract conflicts with this ethos by restricting political speech along with payment.

“In the last few years we’ve offset small production costs for video creators on our platforms and have put certain guidelines in place,” a Facebook spokesperson said. “We believe there’s a fundamental difference between allowing political and issue-based content on our platform and funding it ourselves.”

Facebook has been under fire for disseminating misinformation and struggling to combat election manipulation on its platforms ever since foreign parties used the company’s social network to meddle in the 2016 U.S. presidential election. Governments around the world have pressed Facebook to better police political news and ads, while civil rights activists have said Zuckerberg should intervene to stop voter-suppression campaigns on the company’s services.

Instagram has received far less scrutiny, but the company’s leadership is still concerned about how the app will be used ahead of the 2020 election. “We are just as big a target as Facebook, if not a larger target,” Adam Mosseri, the head of Instagram, said in October.

IGTV offers a mix sports, entertainment, politics and music. Popular posts on Friday included a deleted scene from the “The Office,” anime clips and videos from the website Barstool Sports. There was also a clip from the TV show “The View” posted by an account named “trump_making_us_great” titled “Hilary is the problem why our Country is divided.” Another video was posted by Eduardo Bolsonaro, son of Brazilian President Jair Bolsonaro.

In these new IGTV deals, Instagram offers thousands of dollars to cover production costs for creators, in exchange for a certain number of posts. It’s made dozens of deals, and plans to make more, according to the person familiar with the situation. The biggest deals have eclipsed $250,000 for more than 20 posts. There are other restrictions, too, according to the contract language. The videos can’t be sponsored by a third party, can’t promote content on another platform like YouTube, and can’t involve a sweepstakes or product giveaway.

IGTV debuted in June 2018 as the app’s answer to YouTube, the most popular video site in the world. While the company figured it could funnel many of Instagram’s 1 billion users into this new hub, the initiative has struggled. Few users watch IGTV, and months after its debut, many of Instagram’s most popular accounts have never posted on the video service.

To contact the reporters on this story: Lucas Shaw in Los Angeles at lshaw31@bloomberg.net;Sarah Frier in San Francisco at sfrier1@bloomberg.net

To contact the editors responsible for this story: Nick Turner at nturner7@bloomberg.net, Alistair Barr, Andrew Pollack