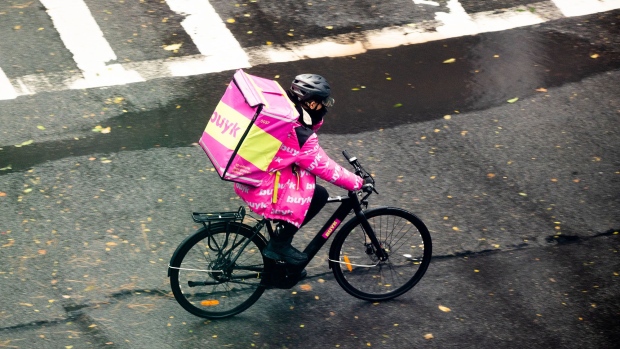 A Buyk delivery person rides a bicycle on the Upper West Side on November 12, 2021 in New York City. , Photographer: Noam Galai/Getty Images

Buyk, which launched in New York just last year, listed assets and liabilities of as much as $10 million each in its bankruptcy petition. The company filed for Chapter 11 protection in New York.

Buyk struggled to access financing after Russian President Vladimir Putin restricted the flow of money outside of the country, Chief Executive Officer James Walker said earlier this month. The startup has been exploring selling itself in a bid to secure capital.

The company listed its co-founders, Slava Bocharov and Rodion Shishkov, as its largest equity holders. Buyk sought court protection “in view of the inability of the investors to further fund the ongoing business,” according to the court papers.

Buyk has arranged a loan of $6.5 million to help cover costs while in bankruptcy, court papers show. The first $5 million is earmarked for the payment of employees and couriers, according to the documents.

The firm recently furloughed almost all its employees -- about 900 people -- amid financial concerns. The startup’s founders are Russian and had been providing bridge financing while the company prepared to close its next funding round. Buyk had been exploring selling itself and had “reached out to all kinds of potential strategic partners in the U.S.,” including DoorDash Inc., Gorillas and Gopuff, Walker said.

Buyk is among a spate of startups offering consumers grocery delivery within 15 minutes. It has received $46 million in venture funding, including from CM Ventures, Fort Ross Ventures and Citius, according to PitchBook. The majority of its 38 warehouses, or dark stores, were in New York, but the startup also expanded to Chicago this year.

Rapid delivery rival Fridge No More permanently shut down its operations last week after talks with DoorDash to buy some of its business fell through.