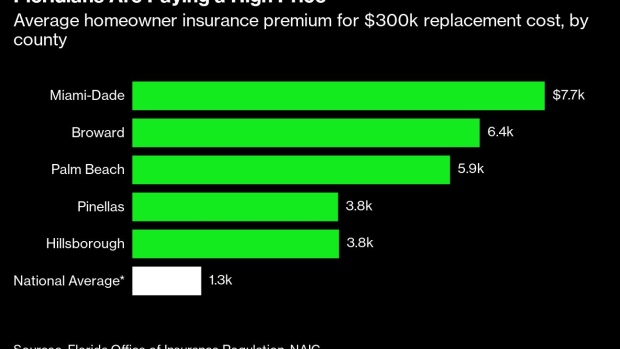 (Bloomberg) -- After meteorologists warned of another active Atlantic hurricane season this year, insurance companies have closed shop in Louisiana and Florida, leaving in the lurch thousands of homeowners in those storm-prone states.

In Louisiana, ferocious storms have already taken their toll on the insurance market and made the state a “tough place to do business,” according to Jeff Albright, head of the Independent Insurance Agents and Brokers of Louisiana. Over the past two years, storms Laura, Delta and Zeta cost insurers $10.6 billion, while Ida alone cost $30 billion, causing some carriers to declare insolvency.

In recent weeks a handful of insurance companies nixed just over 80,000 policies in the Bayou State. As carriers bow out, not only are residents scrambling to find new coverage, but they are faced with limited choices. They may turn to other carriers that double their premiums overnight or to their state’s insurer of last resort, Louisiana Citizens.

Louisiana law, however, mandates that Citizens’ premiums are higher than the highest private rates among major insurance carriers so as not to compete with the private market.

Matt DeMeyers, 45, a real estate developer who lives in the New Orleans suburb of Metairie, said finding a new insurance policy has been “frustrating” at the least. He received a note in late May that his insurance policy would end on July 1. When DeMeyers was offered a new plan, his annual premium jumped to over $23,000, about a two-fold increase.

According to Robert Stone, a New Orleans-based insurance agent, across the state “premiums are double, if not triple” what they were before 2020.

Florida homeowners face the same headache. The heightened risk of large storms threatening to make landfall — after Hurricanes Harvey, Michael, Florence, Dorian, and Ida — coupled with a stream of litigation has been a major blow to the state’s insurance market.

Federated National, which insured 140,000 Florida policyholders, had to undergo a court-ordered restructuring agreement and cancel 56,000 plans after an insurance rating agency downgraded the firm’s financial standing.

Ivis Fernandez, a real estate agent who lives in Homestead, 35 miles south of Miami, was unhappy to learn that her policy with FedNat had been canceled. It was her second home insurance policy in three months, she said. She shared with a reporter paperwork showing she had been paying the carrier $3,002 a year, compared to $1,682 with another insurer in 2019.

As storms intensify, the probability of large-scale property damage climbs, according to Carolyn Kousky, executive director of the University of Pennsylvania’s Wharton Risk Center and an expert on climate risk management. Insurance companies, therefore, have to amass even more capital to pay for all the claims from homeowners to protect themselves against bankruptcy-triggering losses.

Companies and homeowners have not made the adjustments to adequately prepare for a world of higher risk, Kousky said.

“What it really comes down to, in my mind, is that the cost of insurance is related to the risk, and so insurance costs go up when risk goes up,” she said. “The real way to kind of solve this problem is to reduce the underlying risk — and we haven’t done that nearly enough in any place that’s prone to these disasters right now.”

Experts also question whether officials in vulnerable US cities are financially prepared to protect homeowners and urban infrastructure from the damage of storm surges and winds.

“New York, for example, might have enough money to build a big flood wall,” said Dag Lohmann, chief executive officer of KatRisk, a climate catastrophe modeling agency. But other places might not have the resources, he said.