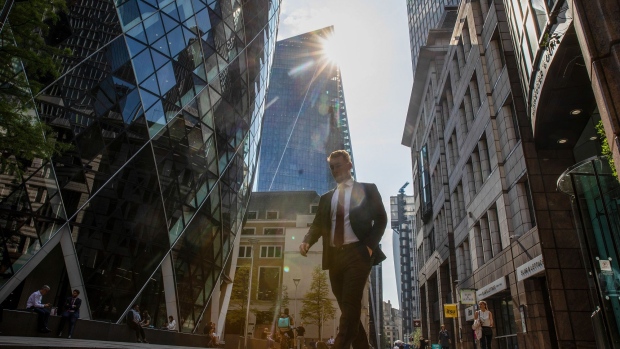 A pedestrian walks through the City of London, U.K., on Tuesday, Sept. 15, 2020. Londoners are steadily increasing their use of public transport after schools reopened, freeing parents to go back to the workplace. Photographer: Simon Dawson/Bloomberg , Bloomberg

U.K. insurance company Liverpool Victoria said it remains in talks with a “number of parties” about a possible transaction after Sky News reported it was negotiating a merger with rival Royal London.

The company known as LV= “confirms that as part of a previously announced strategic review it has been and remains in discussions with a number of parties regarding a potential transaction,” it said Sunday in an emailed statement. Talks are ongoing and there is no certainty any deal will be reached, according to the statement.

Any tie-up for LV= would continue a strong run of dealmaking in the insurance sector despite the broader slump in mergers and acquisitions brought on by the coronavirus pandemic. Helping to drive the trend has been the purchase of closed life insurance policies in Europe by private equity firms and other consolidators.

Sky said in its report Saturday that Royal London had emerged as the most-likely partner and would pursue LV= in a deal worth more than 500 million pounds ($637 million). The two insurers are not in exclusive talks, with Bain Capital also showing interest in buying LV=, the broadcaster added.

A deal could be reached within days, Sky reported, saying LV=’s board met last week. Fenchurch Advisory Partners, a part of Natixis, is reported to be advising LV=. Bain Capital declined to comment to Sky News.

LV= was founded in 1843 to provide an affordable way for people to cover the cost of funerals. It expanded into a company offering a range of insurance, investment and pension products to around 1.3 million customers. In 2019, LV= sold the remainder of its general insurance business to Allianz SE. It appointed Zurich Insurance Group’s Mark Hartigan as chief executive officer in December.

(Adds details on strategic review, other suitors from fifth paragraph)