Intel Corp. Chief Executive Officer Pat Gelsinger slashed sales and profit forecasts for the rest of the year, conceding that the struggling chipmaker needs more time to make its products competitive while assuring investors that the current quarter will be the nadir. The shares tumbled 11 per cent Friday morning, the most in nine months.

The company, which in April had reiterated its annual sales forecast, reported steeply lower second-quarter results and said revenue this year will be as much as US$11 billion less than projected, buffeted by a slackening economy and server market-share losses. The CEO of the biggest maker of computer processors essentially asked for more patience, saying he’s fixing execution issues that have dogged product releases since before he took over last year, and expressed confidence in his strategy to regain industry leadership.

“It feels like they’re clearing out a lot of the bad news,” said Matt Bryson, an analyst at Wedbush Securities, who added that the company should have cut projections several quarters ago. “If you believe in Intel, you believe in Intel in 2024, or 2025 or 2026.”

While investors had anticipated that a PC slump would weigh on Intel’s second-quarter performance, an unexpected 16 per cent drop in revenue from expensive server chips that power data centers dragged down overall sales and profit. Prices are falling and customers have been turning to rival providers for their orders, Intel said.

The majority of Intel’s shortfall was caused by a slowdown in the economy, but the company’s failure to produce better products on time also contributed to the miss, Gelsinger said. The current quarter will be the low point for Intel’s performance, he said, as its customers that are working through unused stockpiles of chips haven’t been placing new orders and will soon need to resume those purchases.

“We feel very confident that it’s the bottom,” Gelsinger said in an interview.

The shares have slipped 23 per cent so far this year, yet they found further to fall after markets closed on Thursday. Intel stock slid as low as US$35.11 following the report, after closing at US$39.71 in New York.

On Thursday, Gelsinger said a delayed server product hurt Intel in the recent quarter, a result of the legacy of projects begun before he rejoined the company last year. Gelsinger sought to emphasize that under his watch as CEO, which began early last year, the company is improving its execution, and new products he has overseen will appear on time and perform as promised.

In the second quarter, revenue fell 22 per cent to US$15.3 billion, significantly below the average analyst estimate of US$18 billion. Per-share profit excluding some items was 29 cents, Intel said, while analysts had predicted 69 cents. Sales in the current period will be as low as US$15 billion, compared with projections of US$18.7 billion, and gross margin will narrow to 47 per cent.

The CEO said he is not backing off a plan to spend heavily on improving Intel’s manufacturing technology, building new products and getting into new markets to chase future opportunities. The “austerity” of the decline in the economy and Intel’s performance will help the company place its big bets more strategically, while cutting back on areas that aren’t key to its future, he said. 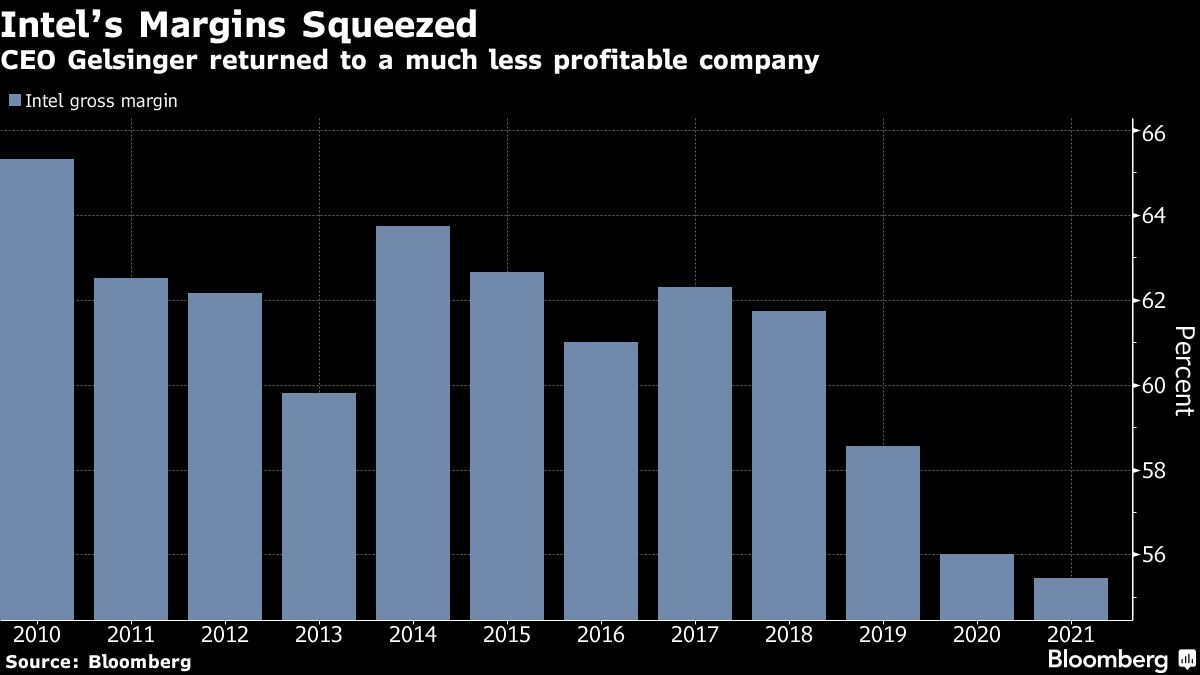 Gelsinger’s push to restore Intel’s manufacturing prowess got a boost this week, when the US Senate and House passed legislation that includes US$52 billion in grants and incentives for domestic semiconductor manufacturing. Intel, which has announced new plants in Arizona and Ohio in an attempt to compete directly with Taiwan Semiconductor Manufacturing Co., has told investors that government subsidies will help cushion the impact of the multibillion-dollar investments on its overall financial picture.

In the meantime, the company expects to record restructuring charges in the current period, Chief Financial Officer Dave Zinsner said on a conference call, saying that details would be disclosed later.

Second-quarter sales for Intel’s data-center division -- where the company generates an outsize portion of profit -- slid to US$4.6 billion, missing the average analyst estimate of US$6.04 billion. The company expects its data-center business to grow more slowly than the overall server market this year, Gelsinger said.

Client computing, Intel’s PC-chip unit, saw sales plummet 25 per cent to US$7.7 billion, compared with an average projection of US$8.76 billion.

The company’s new target for 2022 revenue is US$65 billion to US$68 billion. Gross margin, a measure of profitability that represents the percentage of sales left after deducting production costs, will be 49 per cent for the year, 9.1 points narrower than a year earlier and 3 points shy of what the company had targeted. That metric of profitability, once touted as an indication of Intel’s strength, is being squeezed by increasing competition, and is now more than 10 points narrower than the company’s annual gross margins for much of the past decade.

Shareholders initially welcomed Gelsinger’s aggressive plans to invest heavily to make Intel’s products and manufacturing technology more competitive. The latest results may add to escalating investor concern about how much it will cost and how long it may take to win back market share lost to Advanced Micro Devices Inc., Nvidia Corp. and TSMC. In the company’s statement Thursday, Gelsinger acknowledged the challenge.

“This quarter’s results were below the standards we have set for the company and our shareholders,” he said. “We must and will do better.”