Intel Corp. Chief Executive Officer Pat Gelsinger spelled out the cost of his drive to return the world’s largest chipmaker to leadership of the industry and investors weren’t pleased. Shares fell about 9 per cent in extended trading.

Executives said profitability will suffer during the next few years because of increased spending on the company’s manufacturing technology. Near term, if Intel’s fourth quarter comes in as the chipmaker projects, sales will decline 3 per cent from a year earlier, gross margin will drop 6.5 percentage points and earnings per share will fall about 40 per cent.

Investors are focused on whether Gelsinger can improve Intel’s products quickly enough to halt market share losses to rivals and defections by customers who are beginning to design their own components. Intel’s outlook adds to concern that his efforts to make the chipmaker’s products and manufacturing more competitive will suppress its earnings.

“Near term, we could have chosen a more conservative route with modestly better financials,” Gelsinger said on a conference call after the results. But “this is why I came back to the company, choosing to invest to maximize the long range business that we have.”

When Gelsinger returned to Intel in February to take on its top job, he inherited a company that had lost its footing in the crucial area of manufacturing, which had been the keystone of its dominance of the industry for more than two decades. The CEO has pledged to improve quality and build factories that will be the basis of a new business offering outsourced production to other companies, even competitors.

Chief Financial Officer George Davis said on a conference call that the spending would continue. Gross margin, or the percentage of revenue remaining after deducting the cost of productions, will be 51 per cent to 53 per cent in the next two years before it begins to rise to the company’s more traditional 60 per cent to 65 per cent range, he said. Intel’s capital expenses will be as much as US$28 billion next year while 2022 revenue will be at least US$74 billion, Davis said.

Intel’s stumbles and advances by Taiwan Semiconductor Manufacturing Co. have let others boast that they have processors that perform better than Intel’s, something that wasn’t possible during most of Gelsinger’s first tenure with the company. The 60-year-old originally joined the chipmaker as a teenager before leaving in 2009.

Third-quarter net income was US$6.82 billion, or US$1.67 a share, on revenue of US$19.2 billion, Intel said Thursday in a statement. Gross margin was 56 per cent, compared with an average estimate of 55 per cent. Sales, excluding a memory chip business that Intel is spinning off, were US$18.1 billion, falling short of estimates.

In the crucial data center business, revenue from cloud service providers dropped 20 per cent in the quarter ended Sept. 25. Clients such as Amazon.com Inc. and Microsoft Corp. are making more chips for themselves, raising worries that Intel could permanently lose some of that business. Total data center sales of US$6.5 billion in the period matched estimates, helped by demand from government and corporations.

Shares of the Santa Clara, California-based company declined to a low of US$50.75 in extended trading following the results. The stock closed at US$56 in New York and has increased 12 per cent in 2021, lagging behind an index of semiconductor-related shares.

Revenue in the quarter ending in December will be about US$18.3 billion, in line with analysts’ average estimate. Earnings, excluding some items, will be 90 cents a share. Analysts, on average, projected US$1.02 a share. Gross margin, the percentage of sales remaining after deducting the cost of production, will be 53.5 per cent. 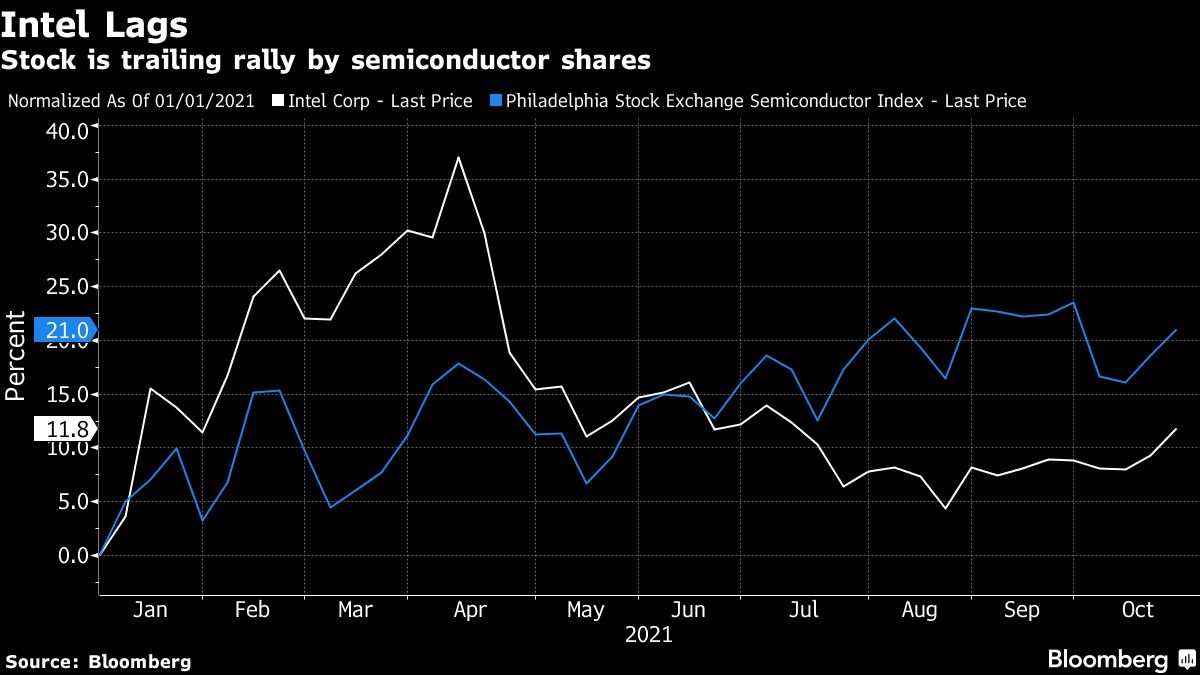 Separately, Intel announced that Chief Financial Officer George Davis will retire in May 2022. Davis is a holdover from Gelsinger’s predecessor and one of the relatively few top executives that the CEO hasn’t replaced.