Earnings will be 80 cents a share in the first quarter, excluding some items, Intel said Wednesday. Analysts projected 86 cents a share on average. Gross margins also are tightening at Intel, once one of the most profitable companies in the industry.

Shares of the Santa Clara, California-based company fell as much as 7.4 per cent in intraday trading in New York. Before the report, the stock had been outperforming those of its chip peers this year.

Though demand for server chips is helping bolster sales, the forecast adds evidence that profit is suffering from an Intel spending spree. Gelsinger, who took the helm last year, has embarked on an ambitious plan to overhaul Intel’s manufacturing. That includes a new factory hub in Ohio announced last week that could cost US$20 billion. The hope is to restore Intel’s technological edge and head off a growing challenge from Asian rivals. 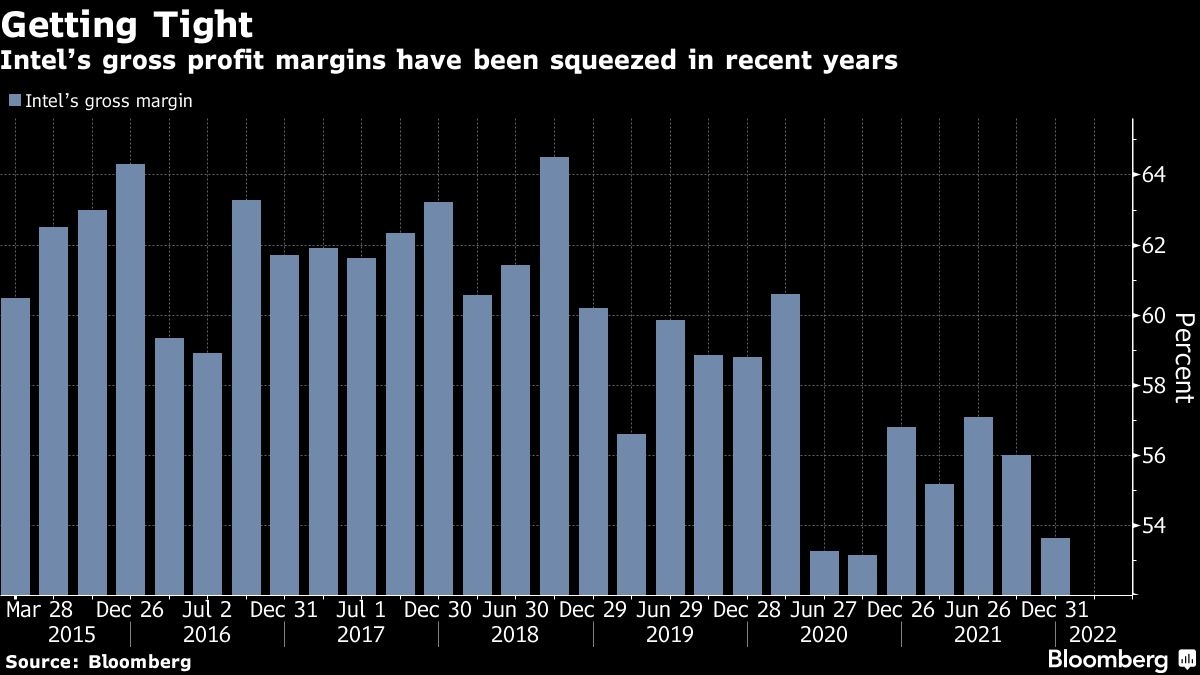 “This is a big investment cycle for us as a company. It is the right one for Intel, it is a critical one for our industry and for our nation,” Gelsinger said in an interview with Bloomberg TV. “At some point, the Street will see we are doing exactly what we say.”

The company’s leadership faced a series of questions about its profit margins on a conference call with analysts. Participants sought assurances that Intel is on a path to restoring the measure to historical levels above 60 per cent. Gelsinger and new Chief Financial Officer Dave Zinsner reiterated that -- while the company is currently spending heavily on new capacity and improving its production technology -- the investment will pay off and eventually restore margins.

Intel’s finance chief said he’s confident the company can deliver a gross margin -- the percentage of revenue remaining after deducting costs of production -- in the 51 per cent-to-53 per cent range this year. And within five years, the measure will be back up to historical levels, Gelsinger said.

Investors have punished chip stocks this year, fearing the companies’ pandemic boom is ending. But Intel has been largely spared their wrath. As of Wednesday’s close, it was one of only two stocks on the Philadelphia Stock Exchange Semiconductor Index to post gains in 2022, along with the American depositary receipts of Taiwan Semiconductor Manufacturing Co.

Intel’s CEO also was asked whether he might consider selling off a portion of the company’s programmable chip unit, a division based on its 2015 acquisition of Altera Corp. Gelsinger answered that another spinoff already underway -- of its Mobileye self-driving business -- may serve as a model for other such deals.

Intel’s leader has only been in place a year, meaning he’s still dealing with products and strategy shaped by his predecessors. Still, investors want to see evidence that his initiatives will help reverse market-share losses and slowing sales. Gelsinger, 60, has argued that products launched in January have already restored Intel’s edge over rival Advanced Micro Devices Inc. But analysts are still projecting that his company’s revenue will be flat in 2022, while AMD’s sales will grow 20 per cent.

Fourth-quarter sales rose 2.6 per cent to US$20.5 billion, beating estimates, fueled by demand for data-center chips. Intel’s gross margin narrowed to 55.4 per cent, excluding some items. That’s a cause for concern, even if analysts were predicting an even bigger squeeze, to 53.6 per cent. Earnings were US$1.09 a share, topping the estimate of 90 cents.

Intel’s margins have typically shrunk to these levels in the past only when it’s faced heightened levels of competition and been forced to price aggressively.

Revenue will be about US$18.3 billion in the current quarter, Intel predicted, beating the average analyst estimate of US$17.7 billion. But there’s a troubling sign behind the sales growth: The company’s biggest data-center customers are pulling back.

Even with Intel’s overall data-center processors sales growing, the top buyers of such chips -- a group that includes Amazon.com Inc.’s AWS and Microsoft Corp. -- shrank 5 per cent in the quarter. Companies like Amazon and Microsoft have been developing their own chips, aiming to decrease their reliance on outside suppliers. Intel, only a few short years ago, had more than 99 per cent market share in server chips.

In Intel’s client business, which supplies processors to PC makers, revenue was down by about US$800 million in the fourth quarter. Notebook sales decreased 16 per cent, while the desktop segment grew 19 per cent.

Intel blamed some of the shortfall in notebooks on “ecosystem constraints” -- in other words, manufacturers can’t get enough other parts so they’re ordering fewer processors. As the pandemic winds down, there are concerns that the overall PC market will drop back down to previous levels. The work-from-home push had fueled demand for computers and other technology.

On a more positive note for Intel, it continues to do well in the relatively new area of communications. Phone and internet service providers are increasingly using its computer chips instead of more specialized gear in their networking. Revenue was up 22 per cent in the quarter.