Intel Corp. is planning a major reduction in headcount, likely numbering in the thousands, to cut costs and cope with a sputtering personal-computer market, according to people with knowledge of the situation.

The layoffs will be announced as early as this month, with the company planning to make the move around the same time as its third-quarter earnings report on Oct. 27, said the people, who asked not to be identified because the deliberations are private. The chipmaker had 113,700 employees as of July.

Some divisions, including Intel’s sales and marketing group, could see cuts affecting about 20 per cent of staff, according to the people familiar with the situation.

Intel is facing a steep decline in demand for PC processors, its main business, and has struggled to win back market share lost to rivals like Advanced Micro Devices Inc. In July, the company warned that 2022 sales would be about US$11 billion lower than it previously expected. Analysts are predicting a third-quarter revenue drop of nearly 20 per cent. And Intel’s once-enviable margins have shriveled: They’re about 15 percentage points narrower than historical numbers of around 60 per cent.

During its second-quarter earnings call, Intel acknowledged that it could make changes in its business to improve profits. “We are also lowering core expenses in calendar year 2022 and will look to take additional actions in the second half of the year,” Chief Executive Officer Pat Gelsinger said at the time.

Intel, based in Santa Clara, California, declined to comment on the layoffs. 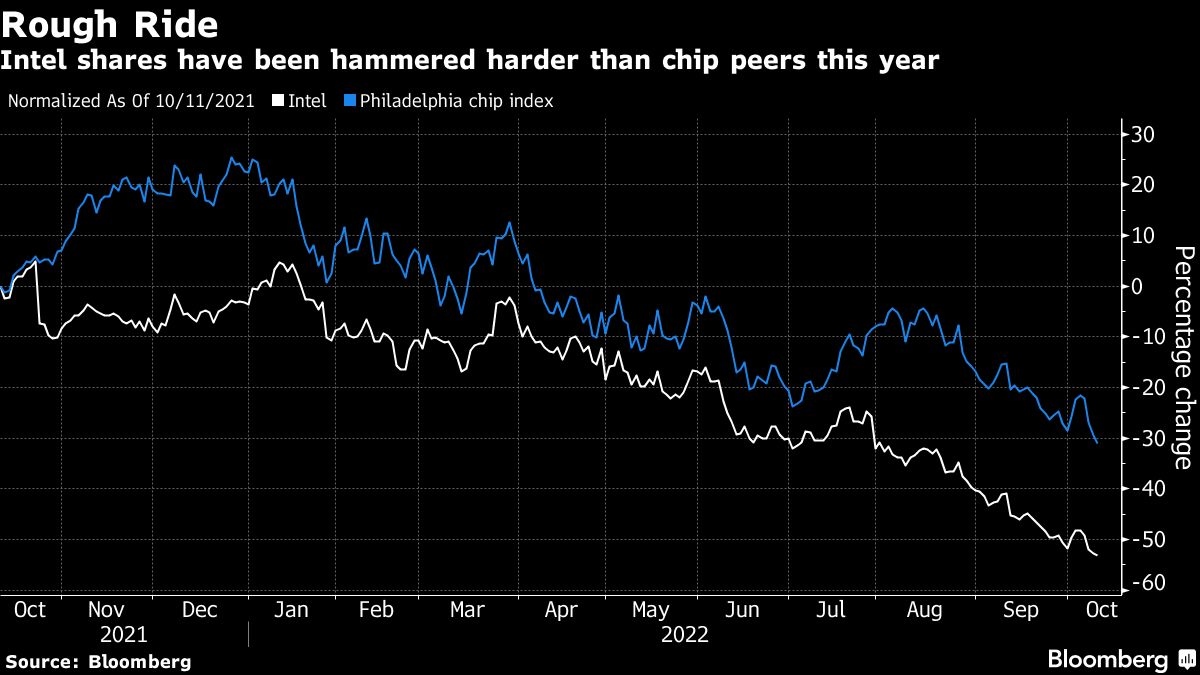 Intel’s last big wave of layoffs occurred in 2016, when it trimmed about 12,000 jobs, or 11 per cent of its total. The company has made smaller cuts since then and shuttered several divisions, including its cellular modem and drone units. Like many companies in the technology industry, Intel also froze hiring earlier this year, when market conditions soured and fears of a recession grew.

Gelsinger took the helm at Intel last year and has been working to restore the company’s reputation as a Silicon Valley legend. But even before the PC slump, it was an uphill fight. Intel lost its long-held technological edge, and its own executives acknowledge that the company’s culture of innovation withered in recent years.

Now a broader slump is adding to those challenges. Intel’s PC, data center and artificial intelligence groups are contending with a tech spending slowdown, weighing on revenue and profit.

PC sales tumbled 15 per cent in the third quarter from a year earlier, according to IDC. HP Inc., Dell Technologies Inc, and Lenovo Group Ltd., which use Intel’s processors in their laptops and desktop PCs, all suffered steep declines.

It’s a particularly awkward moment for Intel to be making cutbacks. The company lobbied heavily for a US$52 billion chip-stimulus bill this year, vowing to expand its manufacturing in the US. Gelsinger is planning a building boom that includes bringing the world’s biggest chipmaking hub to Ohio.

At the same time, the company is under intense pressure from investors to shore up its profits. The company’s shares have fallen more than 50 per cent in 2022, with a 20 per cent plunge occurring in the last month alone.

US tensions with China also have clouded the chip industry’s future. The Biden administration announced new export curbs on Friday, restricting what US technologies companies can sell to the Asian nation.

David Zinsner, Intel’s chief financial officer, said after the company’s latest quarterly report that “there are large opportunities for Intel to improve and deliver maximum output per dollar.” The chipmaker expected to see restructuring charges in the third quarter, he said, signaling that cuts were looming.

Some chipmakers, including Nvidia Corp. and Micron Technology Inc., have said they’re steering clear of layoffs for now. But other tech companies, such as Oracle Corp. and Arm Ltd., have already been cutting jobs.