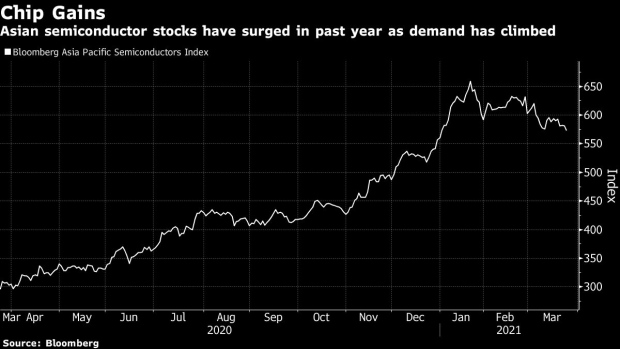 (Bloomberg) -- Intel Corp.’s plan to spend billions of dollars on new factories and create a foundry business that will make chips for other companies sent shares of its two biggest Asian rivals lower Wednesday.

Taiwan Semiconductor Manufacturing Co. slid as much as 3.9%, while Samsung Electronics Co. dipped 1.3% in Seoul before paring its loss. In addition to Intel’s announcement, TSMC was also hit by a severe water shortage and related usages restrictions affecting Hsinchu, where it is based.

The plan launched by Intel’s new Chief Executive Officer Pat Gelsinger aims to put the U.S. firm into direct competition with TSMC, the world’s most-advanced chipmaker. Intel will spend an initial $20 billion on two new plants in Arizona in an attempt to break into the foundry business.

Even with its ambitious goal, Intel is unlikely to become an immediate threat to TSMC, said Charles Shum, an analyst with Bloomberg Intelligence. Potential foundry clients including Apple Inc., Advanced Micro Devices Inc. and Qualcomm Inc. are also competitors with Intel in the processor market, so they may be reluctant to shift orders, Shum said.

Intel’s main Asian competitors have been spending heavily as well, as they look to strengthen their positions. At the same time, chipmakers have been contending with supply constraints amid a surge in demand for electronics due to pandemic lockdowns and growing use of semiconductors in autos. All of this has been good for share prices of chipmakers and related suppliers, with the Bloomberg Asia Pacific Semiconductors Index up 94% in the past year.

Intel “has now adopted a stronger stance on investing resources in-house, including the foundry business,” Jefferies analyst Masahiro Nakanomyo wrote in a report. While the U.S. chipmaker’s spending plans include buildings, investment in equipment is expected to rise as well, which is positive for Japanese suppliers including Nikon Corp. and Tokyo Electron Ltd., he said.

Nikon, which gets 18% of its sales from Intel according to Bloomberg data, soared as much as 13%, the most since 2013. Among other Japanese makers of semiconductor production equipment, Lasertec Corp. jumped as much as 8.3%, Tokyo Electron gained 5.9% and Screen Holdings Co. 4%.

“This is the first proper sign from Intel that it will be going all out on extreme ultraviolet lithography to be a contender in the foundry space to compete with Samsung and TSMC,” said Amir Anvarzadeh, a strategist at Asymmetric Advisors in Singapore. Anvarzedh said this is especially good for glass maker AGC Inc., whose shares gained 2.5%.