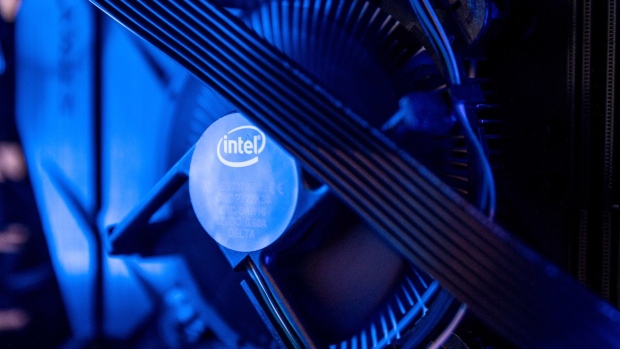 (Bloomberg) -- Intel Corp. unveiled an ambitious bid to regain its manufacturing lead by spending billions of dollars on new factories and creating a foundry business that will make chips for other companies. The stock jumped about 6%.

Gelsinger will spend an initial $20 billion on two new plants in Arizona to support Intel’s attempt to break into the foundry business. Intel plans even more factories in the U.S., Europe and elsewhere, with the CEO pledging that the majority of the company’s chips will be manufactured in-house.

Intel dominated the $400 billion industry for decades by making the best designs in its own cutting-edge factories. That strategy crumbled in recent years as the company missed deadlines for new production technology, while most other chipmakers tapped foundry specialists to make their designs.

The plan will give Intel “a unique ability to have leadership products, with the leadership supply chain and leadership cost structure across every portion of our business,” said Gelsinger, who re-joined the company earlier this year. “We are off to the races, we’re going to be at parity and then to move to sustained leadership, over time.”

During a presentation on Tuesday, Intel forecast capital expenditure of as much as $20 billion in 2021, up from $14 billion last year. The company also projected revenue this year that missed Wall Street estimates.

The company’s problems came to a head last year with a delay in its latest 7-nanometer production process. That followed similar missed deadlines for the previous 10-nanometer standard. On Tuesday, Intel said the latest manufacturing technique is now progressing well, helped by a simplified process.

“Even though the stumble on 10 and seven was embarrassing for a company like ours, it’s fixed,” Gelsinger said in an interview. “We understand what the problem is.”

Intel will use TSMC chip foundries for some of its needs, including parts of its most important products, Gelsinger also said. While that’s a step beyond what it currently does, the company will still produce the majority of its products internally.The world’s largest chipmaker is creating a new unit, called Intel Foundry Services, that aims to “become a major provider of U.S. and Europe-based foundry capacity to serve the incredible global demand for semiconductor manufacturing.”To support this effort, Intel will begin a “significant” expansion of its manufacturing capacity, beginning with two new plants adjacent to its site in Chandler, Arizona. TSMC is also considering building a plant in the area. Intel will announce further capacity expansions in the U.S., Europe and other global locations later this year. The Santa Clara, California-based company currently has factories in Ireland, Israel and China.Gelsinger’s plan is a rallying cry for those who want Intel -- and the U.S. -- to reassert technology leadership. China is investing hundreds of billions of dollars to develop its own semiconductor industry and there are renewed calls for the U.S. government to support domestic production.

Read more: The World Is Dangerously Dependent on Taiwan for Semiconductors

There’s considerable ground to make up for Intel and the U.S., though. Some analysts doubt the company can catch TSMC soon, or ever. Doing so will require a heavy investment. TSMC will spend as much as $28 billion in 2021. That’s twice what Intel spent last year.

“We are excited to be partnering with the state of Arizona and the Biden administration on incentives that spur this type of domestic investment,” Gelsinger said in a statement.

Intel has tried and failed to get into the foundry industry before. That effort failed because its manufacturing process was too tied to its own chip designs, which are primarily high-performance computer microprocessors. That made Intel factories ill-suited to other types of chips, particularly smartphone components that need to be more energy efficient.

“Our past attempts were somewhat half-hearted,” Gelsinger said. The new foundry unit will report directly to the CEO as a standalone business with its own profit-and-loss requirements, he added.

Gelsinger also addressed the potential for conflicts between Intel’s own chip efforts and this new business. Under the plan, Intel’s factories will potentially provide production and license technology to companies that compete with its own products.

Intel is committing “serious” production capacity and leading chip technologies to IFS, the CEO said. “Customers will get the best we’ve got to offer” he added. “We’re going about this in a much more aggressive holistic fashion.”

Gelsinger is making other radical changes. IFS will make chips for other companies, based on Intel’s X86 technology. Previously, only AMD was able to create chips using this dominant computing standard. Intel will also embrace rival standards from Arm Ltd. and an open-source alternative called RISC-V.

Chip manufacturing is unique in that the process of making the tiny components has a large influence on the characteristics and performance of the end product. The best production technology shrinks the transistors on chips so they can store more information, crunch data more quickly, use less power or be cheaper.Intel revenue rose 8% to a record $77.9 billion in 2020 as the company filled orders for chips in computers needed to work and study from home during the pandemic. This year, analysts predict sales will fall 5%, the first decline since 2015.