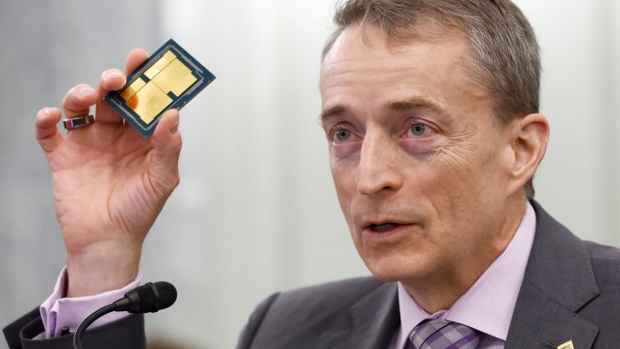 Patrick Gelsinger holds a circuit die during a Senate hearing in Washington, D.C in March 2022. , Bloomberg

“It’s time to get all the chaff out of the way, get to the core issues, get decisions made over the next two weeks,” Gelsinger said in an interview Thursday. “I think both sides of the aisle now -- both bipartisan and bicameral -- feel the urgency of getting this done before the August recess.”

Gelsinger was on Capitol Hill to press members of both parties to pass something before the midterm elections in November. Shortly before sitting down for an interview with Senator Rob Portman and Representative Ro Khanna, his company announced that the “scope and scale” of its investment in the US will depend on whether the funding gets passed.

Intel has vowed to build one of the world’s largest chipmaking hubs in Ohio -- spending up to $20 billion -- with multiple fabrication sites, or fabs. But Intel canceled a planned groundbreaking for the complex Thursday and warned it may have to lower its ambitions without help from the legislation, known as the CHIPS Act.

“We’re going slow and small or we’re going to go big and bold based on the CHIPS Act,” Gelsinger said. “We’re committed to go build two fabs there. I don’t want a two-fab site there. I want an eight or 10 fab site there. I want this to become a tech hub that is the largest manufacturing location and one of the great tech hubs of the world. That is our objective.”

During the interview, Gelsinger had to pause to take a call from a senior White House official who was concerned about Intel scaling back its plans. The urgency of the call underscores the stakes for an administration looking for a legislative win ahead of a midterm election that is expected to wipe out Democratic control of Congress.

“My view is we have to compromise,” said Khanna, a Democrat from California. Congress needs to send the CHIPS Act to the president’s desk, he said. “It’s been way too long. I’ve been advocating that within my caucus and will continue that.”

Portman, an Ohio Republican whose state stands to gain from Intel’s investment, also sees the August recess as the “drop dead” moment to get the legislation done. “We should push against this deadline to get as many decisions made as we possibly can,” he said.