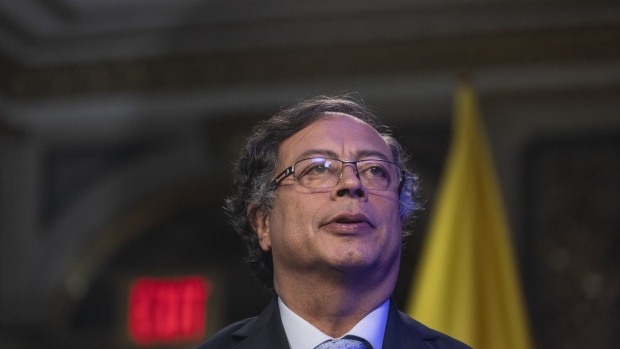 Gustavo Petro, Colombia's president, speaks during a Bloomberg Television interview in New York, US, on Wednesday, Sept. 21, 2022. Petro warned that millions of young Americans will die if the "failed" war on drugs continues for another four decades, in an impassioned plea to change the policy toward narcotics. , Bloomberg

(Bloomberg) -- Colombian President Gustavo Petro slammed the central bank’s decision to raise interest rates to a 14-year high, and floated a series of alternative measures including a tax on hot money flows.

In a series of tweets, the leftist president said higher borrowing costs risk throwing the economy into recession while doing little to curb inflation.

“Is it useful to raise the interest rate to contain inflation?: No,” Petro wrote in a tweet Wednesday. “The rise in interest rates goes against economic growth and employment for the Colombian people.”

The bank raised rates to try to avoid capital outflows caused by higher interest rates in the US, Petro said. These could be avoided with a temporary tax on hot money flows, he added, without elaborating on how this would work in practice or whether the government is considering such a measure.

All of Colombia’s recent presidents, including Ivan Duque, Juan Manuel Santos and Alvaro Uribe, criticized the bank from time to time, or offered it unwanted advice. But none of them ever succeeded in influencing the bank’s actions, said Carolina Soto, a former central bank co-director.

“The president can say what he likes, but they have a mission to fulfill, a constitutional duty,” Soto said, in an audio message. “I don’t think it’ll affect the decisions of the bank which has always done its job, despite comments made in every government by presidents.”

Petro said the government would deepen its own anti-inflationary policies, including taxes on the wealthy, subsidies for fertilizers, agrarian reforms and food programs for the poor.

Petro said the bank’s independence doesn’t shield it from having its decisions questioned. He also criticized the institution when he was a candidate earlier this year.

Inflation surged to a 23-year high of 11.4% in September, the statistics agency said Wednesday. The central bank has raised its key interest rate by more than eight percentage points since September 2021, to 10%, in a bid to curb soaring consumer prices.

(Adds comment from former central bank co-director in 6th paragraph. A previous version of this story corrected the year of the previous inflation peak.)