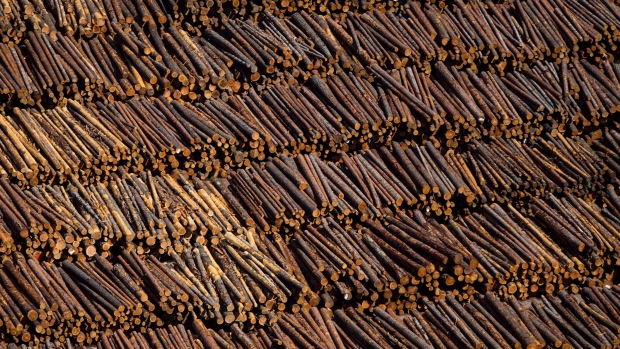 Logs are seen in an aerial view stacked at the Interfor sawmill, in Grand Forks, B.C., on Saturday May 12, 2018. , THE CANADIAN PRESS/Darryl Dyck

VANCOUVER — Interfor Corp. says it had a $35.6-million net loss in the third quarter, which included writedowns related to the permanent closure of a sawmill in Maple Ridge, B.C., as well as restructuring costs at its B.C. Coastal business.

The loss amounted to 53 cents per share and included $14 million of non-cash asset impairments at the Hammond sawmill and $17.8 million in expenses related to human resource matters and the retirement of CEO Duncan Davies.

Davies will retire at the end of the year and be replaced on Jan. 1 by Ian Fillinger, the company's chief operating officer.

The August announcement of Interfor's CEO succession plan was followed on Sept. 3 with a decision to permanently close the Hammond sawmill by the end of 2019 after its log and lumber inventories have been processed.

Interfor's adjusted loss for the three months ended Sept. 30,  amounted to $11.8 million or 17 cents per share, while sales totalled $486.5 million.

In last year's third quarter, which has been restated for a change in accounting rules, Interfor had a net profit of $28.2 million or 40 cents per share. Adjusted net income was the same and sales totalled $570.5 million.