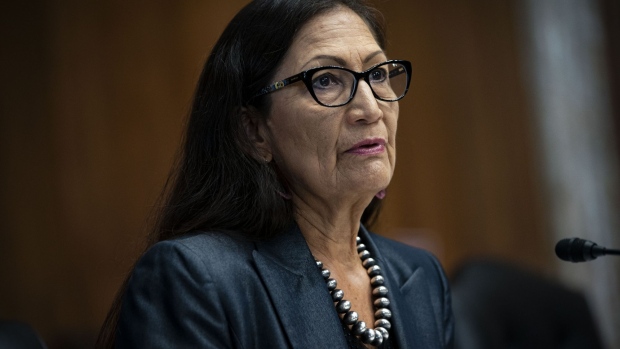 (Bloomberg) -- Interior Secretary Deb Haaland suggested a sharply limited role for fossil fuel extraction on U.S. federal lands and waters in her most expansive comments yet on the administration’s overhaul of oil and gas leasing.

She said the review would seek to restore balance on uses of some 245 million acres (99 million hectares) of government land by advancing clean energy projects, giving Americans a fair return from activity on the territory and ensuring all stakeholders have a say in what happens there.

The Interior Department’s decisions will reflect “where we are in this climate catastrophe that we’re in right now,” Haaland told reporters. “Our country -- our world -- is not the same as it was 50 years ago, so there’s a lot of other things that we need to consider.”

In January, President Joe Biden ordered the Interior Department to temporarily halt oil and gas lease sales so the agency could conduct a comprehensive review of the activity, including its impact on climate change and the environment.

After a federal judge ruled against the pause in June in response to a lawsuit from more than a dozen states, the agency took steps to advance sales, including an auction of Gulf of Mexico drilling rights that could be held before year’s end. But a critical Interior Department report on possible changes to the program has been in limbo for months after a draft was sent to the White House for review.

Meanwhile, the number of permits the agency issued for oil and gas drilling in mostly western federal lands has declined to 171 in August from 671 in April.

Haaland said she will “put the benefit of the American people first” and seek to restore balance in oil and gas leasing on federal lands -- including communities of color next to industrial operations.

Right now, there’s an imbalance with fossil fuel extraction on public lands generating 25% of all U.S. carbon dioxide emissions, Haaland said, adding that she would use her power to restore balance.

“My discretion is really going to include everything with respect to how communities should be able to live free from pollution, radiation, and all those things that could actually kill their children, give them asthma,” she said.

Haaland is a member of the Laguna Pueblo tribe in New Mexico, which she said was located roughly eight miles away from a massive uranium mine that closed in 1980.

“People are still dying from that,” Haaland said. “I want this era to be over with -- where we’re not taking into consideration the toll that it takes on communities, on individuals, and, essentially, our land.”