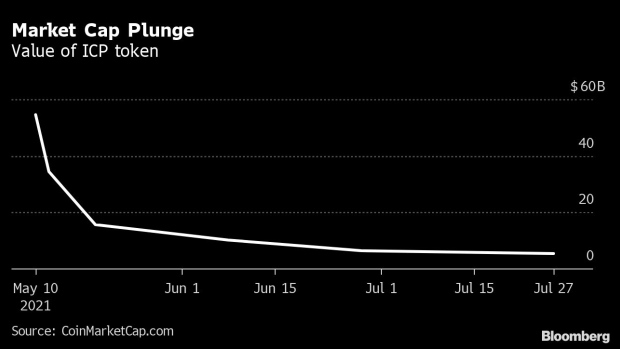 (Bloomberg) -- Internet Computer, known for the dizzying rise and fall of its cryptocurrency’s market value, is seeing traction with users and developers.

Internet Computer has attracted 500 developers and nearly 250,000 users of its applications in just 10 weeks after launch, according to the Dfinity Foundation, which runs the project. Apps that are already up and running on the network include ones similar to Reddit, WhatsApp, LinkedIn and Medium, as well as various finance-related projects, the foundation said.

“Our estimate is that the Internet Computer will have significantly greater DAU than the rest of blockchain by the end of year,” Dominic Williams, founder of Zurich, Switzerland-based Dfinity said, referring to daily active users.

Following the debut of Internet Computer Price, or ICP, in May, the token’s market cap surged past $45 billion, but dropped more than 80% by the end of that month, according to CoinMarketCap. It’s now worth $5.7 billion.

The token and related digital ledger were designed to help anyone -- software developers or content creators -- publish anything they want on the internet without having to go through digital giants like Facebook Inc. or use servers or commercial cloud services like that from Amazon.com Inc. The idea is to avoid corporate gatekeepers, reduce costs, and build services that can compete with tech titans.

Internet Computer is just one of many new networks trying to compete with bigger rival Ethereum, which is widely used for apps like so-called decentralized-finance projects that let users lend, trade and borrow without intermediaries like banks. While its cryptocurrency was just launched in May, the project has been in development for several years.

“Not only do I think it has excellent prospects for success and a top team with plenty of resources, I think it could be a transformative endeavor to take the Internet back from big IT companies like Google, Facebook and Amazon,” said Aaron Brown, who is an investor in the project and also writes for Bloomberg Opinion. “On the other hand, those are formidable competitors with their own top teams and far more resources.