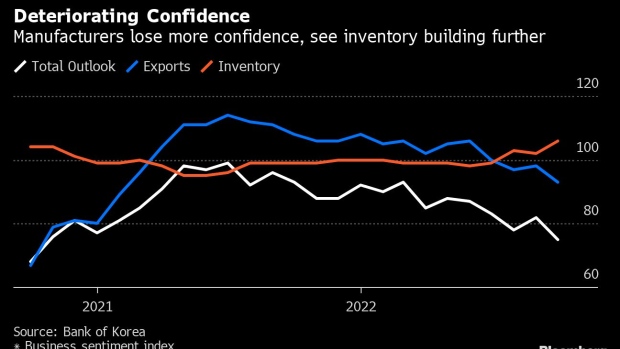 An employee works on the production line manufacturing Hyundai Motor Co. Ioniq 5 electric vehicles at the company's plant in Ulsan, South Korea, on Thursday, Jan. 20, 2022. The last time Hyundai Motor sold a car in Japan was in 2009, when it pulled out after years of dismal sales. Now, South Korea’s top automaker is back, but with a twist: it’s only going to sell electric vehicles, and only online. Photographer: SeongJoon Cho/Bloomberg , Bloomberg

(Bloomberg) -- Inventories at South Korea’s manufacturing giants are piling up as global demand deteriorates, signaling a potential slowdown in the export-driven economy.

Soaring stockpiles at Korean manufacturers, whose exports are seen as a bellwether for global growth, come as central banks across the world raise interest rates to combat inflation. Suppliers are “feeling a burden” with rising inventories as consumption slows “faster than their expectations,” said Kim Hojung, an economist at Seoul-based Yuanta Securities Korea.

The situation is likely to keep worsening. Korean manufacturers expect inventories to rise 7.1% next month from a year earlier, the fastest pace since the global financial crisis, according to a business sentiment index released Thursday by the central bank.

The overall business outlook for October is also cooling, falling to the lowest point since October 2020 when the global economy was still reeling from the first wave of the coronavirus pandemic. That coincides with deteriorating confidence in exports, with manufacturers’ outlook for shipments dropping at the fastest pace in two years for next month, according to the Bank of Korea.

“No one buys smartphones, PCs and laptops,” said Choi Kwangwook, the chief investment officer at J&J Investments. “Excessive rate hikes by central banks are pushing consumers to close their wallets.”