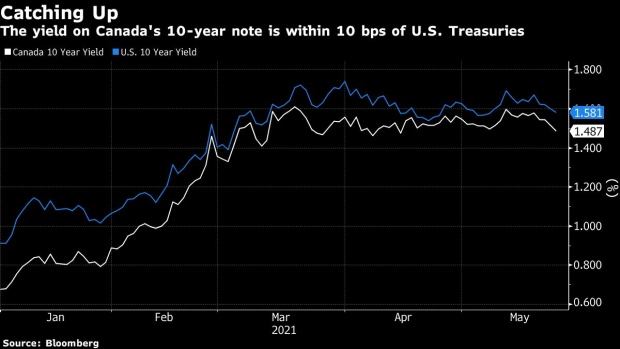 (Bloomberg) -- Government bond yields in Canada have risen too far, too fast and don’t reflect the long economic recovery ahead, according to an Invesco fund manager who runs part of the firm’s $300 billion fixed income portfolio.

Canada’s benchmark five-year bond now has the highest nominal yield among the Group of 10 countries, after investors priced in growth, higher inflation and a boom in commodity prices. The yield on the 10-year note has more than doubled this year, to just below 1.5% as Tuesday morning, putting it within 10 basis points of U.S. Treasuries.

“The market’s gone, in our view, a little bit too far ahead of reality,” Avi Hooper, a senior portfolio manager in Invesco Ltd.’s fixed income unit, said in an interview. “The reality for the Canadian economy is clearly one of a slower reopening recovery.”

Canada’s effort to vaccinate its population against Covid-19 got off to a sluggish start compared with the U.S. and U.K., though the pace has accelerated as supplies of the Pfizer Inc.-BioNTech SE shot are delivered. Less than 5% of the population is fully vaccinated, though about half have now received a first shot.

That’s one reason the largest provinces, Ontario and Quebec, remain under tight restrictions, though both have announced plans to loosen them, including the return of restaurant dining and outdoor events, as new cases decline.

The easing of restrictions should help lift a labor market that is still about 700,000 jobs short of where it should be, according to Bank of Canada estimates.

In Hooper’s view, expectations of an interest-rate increase by the central bank in 2022 are premature.

“This is going to take a long time to play out, so from our perspective, next year is too soon for the bank to consider rate hikes,” he said. “The background for U.S. monetary tightening is far more obvious to me than here in Canada.”

For bond investors, there’s value to be found in the Canadian corporate market, especially from a spate of firms tapping the debt market for the first time, Hooper said. Invesco has found “attractive” new issues on the lower end of investment grade, as well as BB-rated companies, he said.

“We think the economic backdrop is reasonably supportive for the potential for some credit upgrades and especially those that -- if they get upgraded from BB to BBB, which makes them investment-grade-rated -- you get a real technical tailwind,” Hooper said. He wouldn’t comment on specific corporate bonds.

That fund, which Hooper helps manage, earned 9.3% last year, putting it in the top quartile among similar funds. But it’s down 4.5% this year through April as rates rose.