Spending in Toronto’s downtown core still 40% below where it was pre-pandemic: Jan De Silva

The bonds of Canada’s largest cities look attractive as the COVID-19 crisis eases and as provincial and federal programs make up for financial shortfalls, according to Invesco Ltd.’s Avi Hooper.

Cities such as Toronto suffered a fiscal blow after the pandemic forced them to lock down, crimping revenue from local sources such as transit and parking. But federal and provincial governments stepped in with billions in aid, strengthening the “implicit guarantee” on Canadian municipal debt, said Hooper, a senior portfolio manager with the Atlanta-based firm.

“We still believe this federal credit support is undervalued by the market,” said Hooper, who helps manage corporate and government debt, including the firm’s largest Canadian bond fund. Canadian cities have virtually no default risk, yet the bonds still have “meaningfully higher yields” than federal government debt, he said in an emailed response to questions. 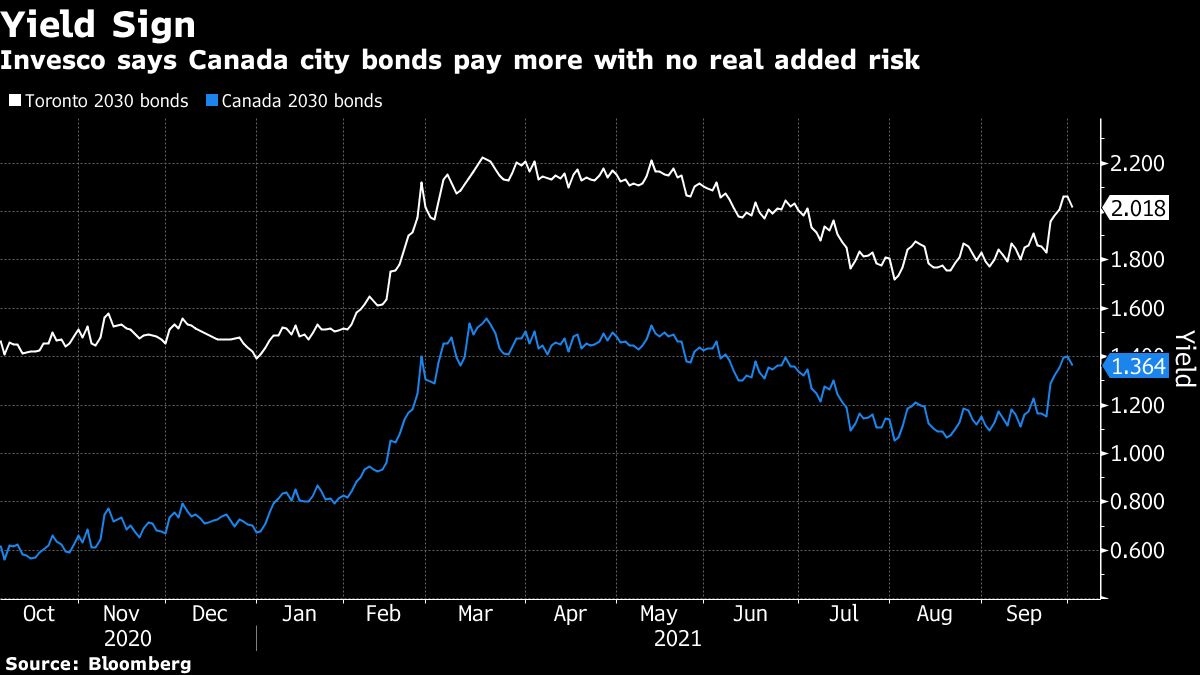 One example was Toronto’s new 30-year issue, Hooper said, which was sold in April at a spread of 103.5 basis points to comparable federal bonds and now trades at a spread of about 95 points, according to data compiled by Bloomberg.

Canadian cities tend to have strong credit ratings because agencies believe higher levels of government would never let them default. There are also legal limits on their borrowing. To help cities get through the crisis, Prime Minister Justin Trudeau’s government pledged billions for transit and other local needs as part of a $19 billion (US$15 billion) “safe restart” agreement with provinces last year.

“One thing that happened in all of this is that there was a greater understanding by those senior levels of government that they have to support infrastructure, municipalities and especially transit,” Randy LeClair, director of capital markets for the city of Toronto, said last week at the virtual Bloomberg Canadian Fixed Income Conference. “That’s been loud and clear.”

Local governments in Canada are generally allowed to borrow money only for capital projects -- they’re forbidden from running operating deficits. Toronto, which is rated AA by S&P Global Ratings, is also bound by a rule that it can’t spend more than 15 per cent of its budget on debt service, LeClair said.

In some cases, city finance departments enjoy better credit ratings than the provinces that oversee them. That’s the case for the Municipal Finance Authority of British Columbia, which helps finance the capital plans of Vancouver and other local governments in the west coast province.

The authority has a AAA rating from S&P Global, higher than British Columbia’s AA+. Yet the authority’s bonds due in 2031 pay a yield that’s slightly higher than the province’s benchmark 10-year bond, and more than 40 basis points higher than a U.S.-dollar note due the same year, according to data compiled by Bloomberg.

Some of that spread is to compensate investors for lower liquidity. However, even during the COVID-19 market disruption of March and April of last year, “while the spread between the bid and offer widened somewhat, liquidity was plentiful across the sector,” Hooper said.