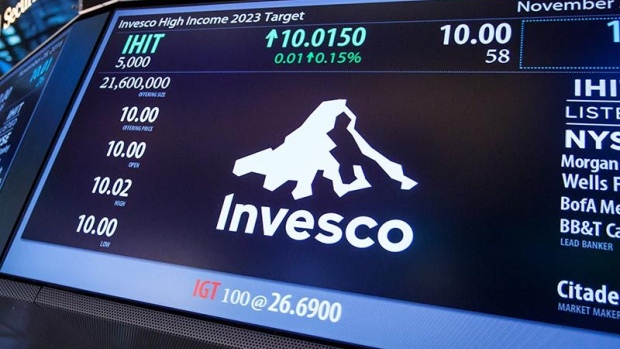 Invesco Ltd. is looking to active, nontransparent exchange-traded funds as the next step forward for the US$4.6 trillion industry, hoping the new products will be less vulnerable to traders who exploit expected changes in ETF holdings.

The Atlanta-based investment firm, which currently manages US$1.2 trillion, is pursuing both a methodology from Fidelity Investments that keeps some holdings hidden to protect strategies, as well as its own proprietary structure, because “the risk of front-running is real,” according to Anna Paglia, head of ETFs and indexed strategies for Invesco.

“It’s not just a shiny object, it’s really about content,” Paglia said in an interview. “We have strategies that today we don’t feel comfortable bringing in an active, fully transparent wrapper.”

The new ETFs would join a slate of products introduced this year that don’t disclose their portfolios each day, a departure from traditional ETFs that reveal holdings daily. Advocates contend that the new structure will help ETFs win over assets from mutual funds, while others question how much investors will be interested in less transparency and the higher costs associated with the active products.

Since Paglia took over the role of head of ETFs in June, succeeding Dan Draper, she’s been closely watching other firms’ models as they emerge, she said.

American Century launched the first of these funds using a structure licensed from Precidian Investments that allows issuers to publish their holdings once a quarter, and calculates the indicative value of the ETF’s assets every second to help the fund’s price stay in line with the value of the securities it holds. Another model from Blue Tractor group discloses the securities in portfolios every day, but not the size of the positions.

“We don’t think there is just a right or wrong way of going about it, we think time will tell which model is better than the other,” she said. “Investors will vote with their money.”

Invesco already has filed with the Securities and Exchange Commission for approval of the nontransparent Focused Discovery Growth ETF, which will invest in U.S. companies that the fund’s managers expect to have above average growth rates.

Invesco currently controls 5.4 per cent of the ETF market, according to data compiled by Bloomberg, including the US$130 billion QQQ Trust Series 1 ETF. That fund recently experienced its worst daily outflow and inflow in 20 years back-to-back, due in part to options trading that has whipsawed the broader market.

Paglia said the activity signals how ETFs are being used by investors in innovative ways.

“To me, this is another iteration related to the technology,” she said. “ETFs are not just products, they are used to trade futures, to trade options.”