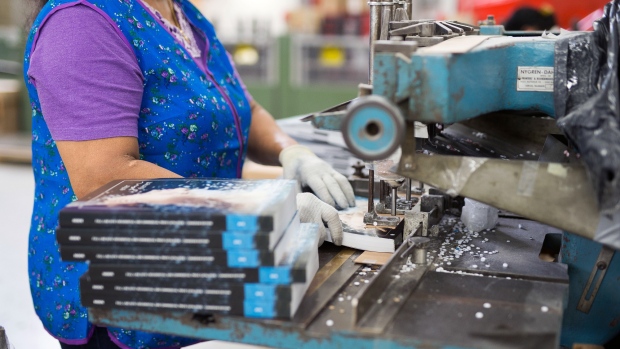 An employee uses a drill press to add holes to books at the Holmes Finishing House printing and binding facility in Markham, Ontario, Canada, on Wednesday, May 30, 2018. , Bloomberg

Canada’s small business managers plan to keep their investment spending flat this year, according to a new survey that mirrors a crucial question asked by the central bank.

Business Development Bank of Canada found 32 per cent of owners expect to invest less, just ahead of the 31 per cent who plan to spend more, according to a report Tuesday. That result is gloomier than the Bank of Canada’s last quarterly business outlook survey, which showed 46 per cent of companies large or small would spend more and 21 per cent planned cutbacks.

“Rising concerns about the economy and rising capacity constraints -- especially with the ongoing shortage of qualified labour -- all weigh on investment intentions,” Pierre‑Olivier Bedard‑Maltais, an economist at BDC, said in the report.

Investment is an important question for Canada this year. Consumer spending is slowing down, while volatility in Alberta’s oil patch and trade tensions between the U.S. and China are clouding the outlook. Finance Minister Bill Morneau devoted several new measures in his Nov. 21 fiscal update to business investment tax breaks to stay competitive with the U.S.

The development bank’s report showed mixed views of the economic backdrop. While 73 per cent of business owners said they expect revenue to grow this year, little changed from 2018, confidence in Canada’s economy fell to 58 per cent, from 64 per cent.

“The plateau in business optimism suggests that the economy may be reaching its full potential,” Bedard‑Maltais said.

The biggest reasons for holding back investment were labor shortages and a lack of cash flow, with about half the respondents citing each of those factors. Technology and wholesale company managers more tied to exports showed the most investment confidence while those associated more with consumer spending saw declines, the BDC report said.

Alberta showed the least optimism among Canadian regions with 35 per cent of managers in the oil-dependent western province confident about the economy. Quebec led with a confidence reading of 78 per cent while in Ontario, the most populous province, it was 58 per cent.

It’s the first BDC survey to compile a so-called balance of opinion on investment that mirrors what the central bank does. BDC surveyed 4,024 owners, a much greater number than the Bank of Canada’s tally of about 100 each quarter, but the BDC figures are older, as the survey was taken from August to mid-October and the Bank of Canada’s results were from November.

The phone survey was taken by the SOM research firm and has a margin of error of plus or minus 2 percentage points, 19 times out of 20. Montreal-based BDC was created by the federal government to provide financing and advice to smaller companies.