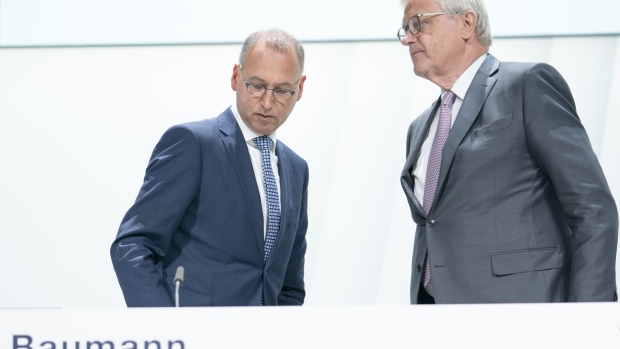 Werner Baumann, left, stands with Werner Wenning, prior to the company's AGM in Bonn, on April 26. , Bloomberg

(Bloomberg) -- The shareholder rebellion at Bayer AG is poised to worsen after its supervisory board ignored an unprecedented no-confidence vote against the leadership of Chief Executive Officer Werner Baumann.

Several top investors of the German chemicals and drugs giant are frustrated with directors’ decision to back Baumann and his strategy that led to the $63 billion takeover of Monsanto, according to people familiar with the matter. The investors consider the move a sign that Bayer is unwilling to address shareholder concerns, the people said, asking not to be identified because the deliberations are private.

Bayer now needs to consider an overhaul of the oversight board led by Werner Wenning, take a more forthcoming approach in dealing with litigation in the U.S. and conduct a strategic review -- including a potential breakup of the conglomerate into crop science and pharmaceutical companies, they said.

At a fractious, 13-hour gathering in Bonn on Friday, more than 55 percent of shareholders voted against absolving Baumann and other managers of responsibility for their actions in the takeover of agriculture company Monsanto last year. Bayer has lost 35 billion euros ($39 billion) in market value, due in large part to subsequent lawsuits that allege the main ingredient of Roundup -- the weedkiller Bayer acquired through Monsanto -- causes cancer.

The lawsuits have multiplied, totaling 13,400 U.S. cases by April 11. Bayer has vowed to fight in court and said there’s no scientific proof that glyphosate causes cancer.

Baumann reassured employees in an email on Saturday, saying "we need to maintain our focus on delivering value for our customers,” according to a person who has seen the communication and asked not to be identified because the information isn’t public.

The vote was heavily influenced by prominent shareholder advisory firms in the U.S., Baumann wrote.

Bloomberg News reported earlier this week that Baumann could lose the ballot. In a separate motion, some 66 percent voted to absolve Wenning and the rest of the supervisory board. While the results aren’t legally binding, it prompted an emergency board meeting that stretched into the early hours of Saturday.

In a statement overnight, Wenning said while the supervisory board treated the vote “very seriously,” it “unanimously stands behind” Baumann and his team. The chairman also downplayed the ballot, saying it amounted to a clear signal that shareholders want Bayer to "bring out the company’s strengths to a greater extent in the future."

Several large investors said they would prefer Baumann to remain in place because a change to Bayer’s management board could further delay a resolution to the U.S. litigation and any strategic review that could result in a break-up of the company.

Billionaire activist investor Paul Singer’s Elliott Management Corp. is said to have built a stake in Bayer with a view to consider splitting the company into separate pharmaceutical and agrochemical makers. Earlier this week, Elliott disclosed a $1.4 billion stake in German software maker SAP AG. Its other European holdings include Pernod Ricard SA and Telecom Italia SpA.

To contact the reporters on this story: Eyk Henning in Frankfurt at ehenning1@bloomberg.net;Tim Loh in Munich at tloh16@bloomberg.net;Naomi Kresge in Berlin at nkresge@bloomberg.net

To contact the editors responsible for this story: Kenneth Wong at kwong11@bloomberg.net;Chad Thomas at cthomas16@bloomberg.net