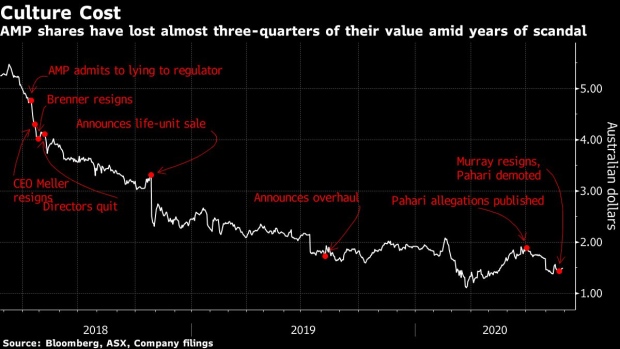 (Bloomberg) -- The sexual harassment scandal that triggered the resignation of AMP Ltd.’s chairman and the demotion of the senior executive at the center of the claims has sent a clear message to corporate Australia: investors now have zero tolerance for misbehavior.

Finance industry veteran David Murray quit on Monday after an investor revolt over the promotion of Boe Pahari to run the firm’s A$190 billion ($137 billion) asset management unit, some three years after he settled a complaint brought by a female colleague.

The demand for action is a sharp change from less than four years ago, when former Seven West Media Ltd. CEO Tim Worner was “disciplined,” but kept his job after being cleared of claims of drug use and abusing his expenses during a years-long extra-marital affair with a co-worker. Since then, the #MeToo movement has swept the world, while Australia’s giant pension funds are using their growing clout to demand companies address the way they deal with everything from poor culture to climate change.

“This is really a turning point for corporate Australia,” said Kate Jenkins, the Sex Discrimination Commissioner at the Australian Human Rights Commission. “Our community standards have changed.”

A report by the commission in March found Australia still lags behind other countries in preventing and responding to sexual harassment. Its most recent survey in 2018 found one-in-three people had experienced sexual harassment at work in the previous five years.

The criticism of AMP’s handling of the scandal was led by pension firms including A$52 billion fund Hesta, 80% of whose members are women. CEO Debby Blakey said Pahari’s promotion and the board’s handling of the issue “exposed serious governance and cultural issues at the highest levels of the company.”

They were joined by asset management firm Allan Gray, AMP’s second-largest shareholder, which threatened to call an extraordinary general meeting to oust the 71-year-old Murray and board ally John Fraser if no action was taken, according to the Sydney Morning Herald.

The Australian pension fund industry’s power has grown in the past five years as its assets swelled by about 40% to A$1.8 trillion, fueled by a mandatory savings program for workers. They’ve taken more investments in-house, hiring teams to specifically look at environmental, social and governance risks.

In another sign they are increasingly willing to wield their influence, AustralianSuper, the nation’s largest pension fund, this week urged Rio Tinto Group to reconsider a decision to levy only financial penalties against top executives in response to the destruction of key Aboriginal heritage sites.

And last year, pressure from pension funds prompted the resignation of then-Westpac Banking Corp. CEO Brian Hartzer and the early retirement of Chairman Lindsay Maxsted after the lender initially tried to ride out being sued over Australia’s biggest breach of anti-money laundering laws.

“There’s an increased understanding in the investment community that corporate culture can be a material investment risk, particularly if it’s a really poor culture,” said Danielle Welsh-Rose, ESG investment director for Asia Pacific at Aberdeen Standard Investments. “We’ve seen that play out over the last few years, and as recently as this week.”