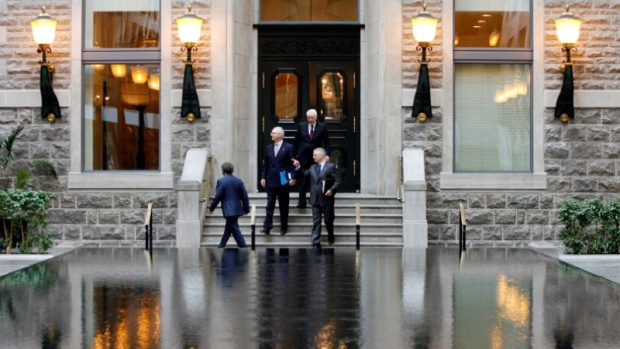 Power Corp. of Canada's executives leave their office to attend the company's annual shareholders' meeting in Montreal, Quebec, Canada on May 10, 2007, when Power Corp's stock hit an all-time high. Power Corp shares are off about 16 percent in the last ten years. , REUTERS/Shaun Best/File Photo

TORONTO - Power Corp of Canada should offload a number of non-core assets that could fetch about $10 billion (US$7.9 billion), a shareholder told Reuters late on Monday, in a move he said would unlock shareholder value at the diversified holding company.

Graeme Roustan, who owns less than 1 per cent of Power Corp, said in a letter to the company chairman that the group should sell assets including its interests in Pargesa Holding SA, renewable energy unit Power Energy and asset manager China AMC, among others.

The letter, which was reviewed by Reuters, did not mention the value of the assets to be offloaded.

Roustan said in his letter that Power Corp is invested in too many unrelated sectors, with some portfolio holdings increasing risk rather than diversifying it.

"(The non-financial services) investments represent an important element of our long-term diversification strategy," Power Corp spokesman Stéphane Lemay said, adding that the value of these investments has risen 78 per cent to $3.2 billion in five years to the end of 2016.

Lemay said the company received Roustan's letter and has responded to him.

Canadian companies are regularly being pushed for change by investors in a country that is seen as conducive for shareholder activism. Investors can call for a special meeting by acquiring a 5 per cent stake.

Roustan, the former chairman of Performance Sports Group Ltd, has in the past called for changes at Canadian drugmaker Aeterna Zentaris Inc. Power Corp, controlled by the Desmarais family, should form a special committee and hire an investment bank for the asset sales, said Roustan, who has also asked for a board seat.

Power Corp, which has a $13.6 billion market value, should use the asset sales proceeds to acquire companies in its core financial services sector, buy back shares or pay out a special dividend, Roustan said.

Alongside its financial, energy and media investments, Power Corp also owns stakes in Great-West Lifeco and asset manager Mackenzie Investments via its unit Power Financial Corp. The stock, which was little changed on Tuesday, has gained 9.5 per cent since the start of the year, while the benchmark TSX has added 3.7 per cent in the same period.