A new study from the Bank of Canada released Thursday found investors accounted for nearly 20 per cent of home purchases dating back to 2014, a figure that has rapidly outpaced other types of buyers during the COVID-19 pandemic.

The report, titled Housing Demand in Canada: A novel approach to classifying mortgaged homebuyers, found the share of residential investors surged in 2017, when home prices in cities like Vancouver were skyrocketing, and surged by an even bigger pace in 2021. 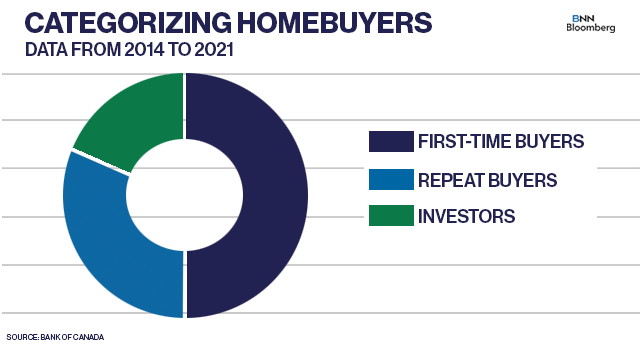 The Bank of Canada analyzed microdata from various sources including from the big Canadian banks and credit reporting agencies. The central bank's staff then developed an algorithm to match the datasets to categorize mortgaged home purchasers into three distinct groups: first-time buyers, repeat buyers and investors.

The report acknowledged the method's limitations in capturing all investors, or those with multiple mortgaged properties, because it only examines domestic data, so foreign buyers would only be counted if they obtained a mortgage in Canada. The data also did not factor home purchases made by corporations or if cash was paid for those properties, meaning the number of investors could be underreported.

Despite government intervention, home prices have hit new all-time highs in many markets across the country, bringing the conversation on housing affordability and financial stability back to the forefront.

The Bank of Canada study is also among the first official policymaker-backed reports that demonstrate the significant role investors play in Canada's housing market. Aside from anecdotes from the real estate community, previous studies on residential investors have generally shown to be much smaller.

A study from the British Columbia government in 2016 that found foreign investors accounted for about 10 per cent of Vancouver home sales over a five-week span.

As home prices have outpaced increases in disposable income, first-time homebuyers have been severely impacted.

The Bank of Canada report found the share of first-time homebuyers has been declining since 2015 to a new low set last year.

"A key insight to emerge from our initial analysis of this data is that home purchases are being driven increasingly by existing homeowners. Within this group, investors have seen the largest gain in their share of home purchases during the COVID 19 pandemic," the report said.

It also acknowledged that while investors can be a significant source of instability in the market, they're also an important factor in adding rental supply.