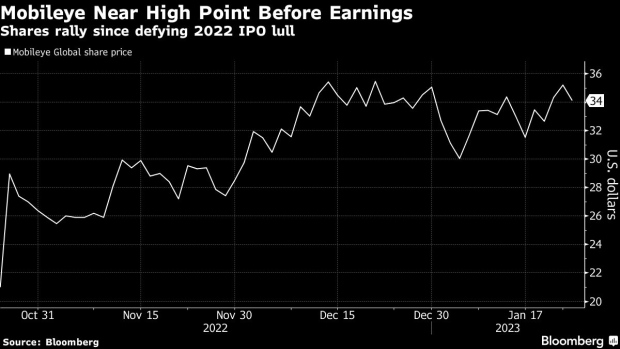 (Bloomberg) -- Last year’s historic slowdown in initial public offerings is leaving a void of earnings data in its wake, hindering investors who want more clarity on the health of the economy and corporate balance sheets.

Before the IPO market effectively shuttered in 2022, with proceeds shrinking 93% from 2021 to its lightest year in three decades, new listings were concentrated in technology and consumer-facing goods businesses.

More data from those sectors — particularly from newer, growing companies — would provide important signals for how the economy is faring, said Zachary Hill, head of portfolio strategy at Horizon Investments.

“People are trying to discern what the state of the consumer is really like — what is their spending power and how is the economy getting back to equilibrium in terms of spending more on services and less on goods,” he said in an interview. “A lot of these direct-to-consumer businesses would have a better readthrough into that.”

In addition, data from technology startups would help traders better understand how the industry is dealing with costs in response to the first downturn ever for some of these firms, Hill said.

Just four members of last year’s US IPO cohort have confirmed dates on the earnings calendar, according to data compiled by Bloomberg, starting with Mobileye Global Inc. on Thursday — the best-performing IPO of the year that’s now up 60% from its offering price. After Mobileye, the schedule is blank for four full weeks before another 2022 IPO reports.

Earnings are one of the first catalysts to move a stock after going public. That price action is important to understanding investors’ tolerance for risk, Bloomberg Intelligence equity strategist Michael Casper said in an interview.

“Those shares are often riskier than similarly sized stocks due to limited public financials and typical lack of profitability,” he said. “When they are doing well right after issuance, its typically a risk-on period whereas when they’re not, its usually risk-off.”

The dearth of data is also complicating listing plans for 2023 IPO candidates.

Individual firms hoping to reopen the IPO market with 2023 listings find themselves with fewer peers to cite as models. A lack of success stories among recent IPOs is adding to the headwinds that have been holding back dealmaking since the start of the year.

“Fewer earnings reports from new issues adds more uncertainty,” said Erik Gordon, professor at the University of Michigan’s Ross School of Business. “When there are fewer IPOs, there are fewer comparable companies investors can use as benchmarks.”

Investor reactions to earnings announcements from 2022 IPOs could provide a view into appetite for similar offerings in the months ahead, MKM analyst Rohit Kulkarni said in an interview.

After Mobileye this week, January 2022 IPO TPG Inc. will report on Feb. 15 and Intel Corp. spinoff Corebridge Financial Inc. will post results on Feb. 17. Modiv Inc. has confirmed a Feb. 23 report date, around when other smaller-cap names may join the calendar.

--With assistance from Jessica Menton.

(Updates to adds trading in Mobileye in sixth paragraph. A prior version corrected the quote in the fourth.)