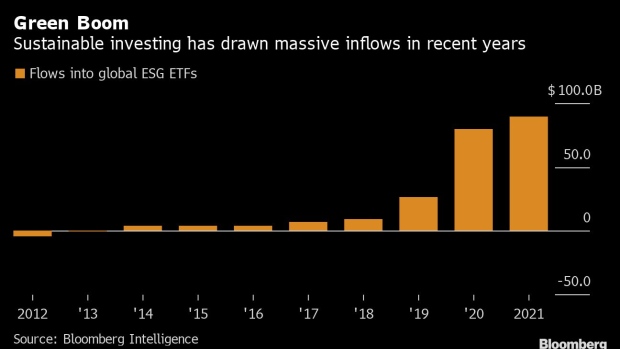 Flood water surrounds vehicles and grave stones in a cemetery in Bad Neuenahr-Ahrweiler, Germany, on Saturday, July 17, 2021. The death toll from the floods that devastated parts of western Germany rose to at least 103, with scores of people injured and many others unaccounted for after houses were swept away and roads and bridges were badly damaged. , Bloomberg

At this month’s climate talks in Scotland, a lot of time was spent condemning the shortage of money available to fight global warming.

Some of the loudest complaints came from less developed nations that are suffering its most extreme effects. Wealthy countries whose emissions are most responsible for the global catastrophe are providing far-too-little cash to help them address its increasingly disastrous consequences, they said.

After many hours of often fraught discussions, the Glasgow climate pact ended up including language that urges developed nations to “at least double their collective provision of climate finance for adaptation” to developing countries by 2025. That would mean that rich countries should make available $40 billion in adaptation funding, according to numbers crunched by Carbon Brief, in the next three years.

It’s clearly not enough (and ever so unlikely to happen if recent history is any indication). In a recent report, the United Nations Environment Programme said annual adaptation costs in developing countries alone are currently estimated to be around $70 billion, with the numbers expected to climb to more than $140 billion in 2030 and to as much as $500 billion in 2050.

Climate adaptation refers to the process of adjusting our existence to current or expected climate-induced changes to the environment. To date, investment has largely focused on mitigation, in areas such as renewable energy and battery technology. The next step will involve innovations as varied as highly efficient air conditioners that cut energy use, floodgates to protect low-lying cities and various technologies aimed at stemming the spread of wildfires.

Even though the lack of appropriate government funding remains a substantive obstacle, executives at Wellington Management Co., one of America’s largest investment firms, said they were encouraged by the focus on climate adaption at COP26. The Boston-based firm said it expects demand for climate adaptation solutions to increase significantly.

For investors, that would mean backing companies that do everything from upgrade electrical grids and transmission lines to develop erosion-control and drainage systems or make more weather-resistant building materials.

To date, the global investment community has been slow to focus on adaptation, thanks to a traditional focus on short-term profits at the expense of long-term survival. Most investors engage in “short-termism” because they tend to be evaluated on their one-, three- and five-year performance records, and many fund managers have (incorrectly) assumed that the consequences of the climate crisis were far in the future, according to a Wellington report entitled “Adapting to Climate Change: Investing in the Resiliency Imperative.”

“Most investors are ‘short’ climate risk; in other words, a large-scale climate event is likely to detract from portfolio returns rather than increase them,” the report states. “Investments in adaptation can serve as a hedge against this exposure, as we expect future demand and thus market returns to be correlated with the structural trend of climate change.”

Analysts at Bank of America have predicted the climate adaptation market will double to $2 trillion a year within the next five years and the European Commission has proposed spending at least 25% of the total EU budget on climate action for the next six years.

The financial markets are “only just beginning to see climate-related tailwinds,” according to the Wellington report. “It will take time for an opportunity set of climate-adaptation securities to mature, which simply means investors have an opportunity to gain first-mover advantage.”

One of the few bright spots from the multinational negotiations in Scotland was the “all-in” commitment from financial companies to do their part to help address the climate crisis, said Wendy Cromwell, Wellington’s vice chair and head of sustainable investment, referring to the announcement at COP26 that more than 450 banks and asset managers had pledged to meet the goals set out in the Paris climate in an interview.

“We think more and more capital will be channeled from the investment community to climate adaptation and mitigation,” she said in an interview.

But promises emanating from Glasgow, like those from Paris in 2015, are easily broken. Moreover, there are additional constraints faced by ostensibly climate-conscious asset managers.

Of Wellington’s $1.4 trillion in assets under management, only 11%, or $146 billion, is directly aligned with achieving net-zero emissions by 2050 or sooner. The number would almost certainly be higher, but about 90% of the funds that the firm oversees are managed for external institutions such as mutual fund companies, corporate pension plans and university endowments, and “we can’t make determinant statements about their assets,” Cromwell said.

However, Wellington said it’s working with these clients to help them understand climate risks and make their own commitments. The bottom line is investors must think differently, Cromwell said. “Climate science shows that the world will face more frequent and more severe climate events, and society will need more adaptation ideas that protect lives and assets,” she said.

Tune into the Bloomberg New Economy Forum livestream. At a moment of unprecedented crisis, world leaders are convening in Singapore to define the challenges that face the global economy and to draft solutions together. Watch now.