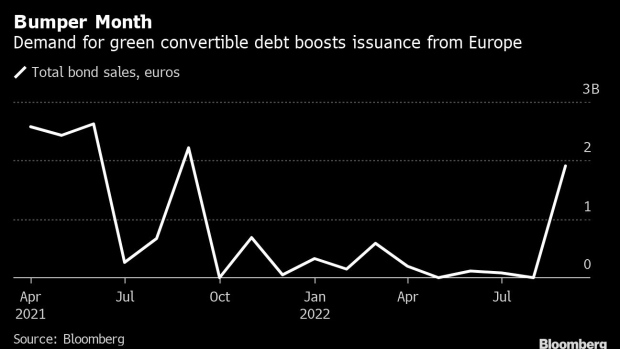 Vapor rises from chimney stacks at the Agios Dimitrios Power Plant, operated by Public Power Corp. SA (PPC), in Kozani, Greece, on Monday, Sept. 26, 2022. The economic damage from the shutdown of Russian gas flows is piling up fast in Europe and risks eventually eclipsing the impact of the global financial crisis. Photographer: Konstantinos Tsakalidis/Bloomberg , Bloomberg

(Bloomberg) -- Some bond investors are playing the long game as a deepening standoff with Russia threatens Europe’s energy supply, betting that gas shortages will speed up a transition to renewable energy.

They’ve been buying up bonds linked to clean-energy companies that can be converted on maturity into stocks, meaning they will receive coupon payments throughout the coming gas crunch and potentially end up with a share in a flourishing company. September is shaping up to be the best month for sales of convertible bonds in a year after three renewables firms came to market, meeting with high demand at a time when many companies have had to pull sales.

Russian President Vladimir Putin’s weaponizing of energy supplies has accelerated plans for the continent to transition away from fossil fuels. That process has taken on even more urgency this week following reports of suspected sabotage to pipelines carrying Russian gas to Europe.

“When markets are weak the convertible bonds of these companies provide solid downside protection given their solid fundamentals and a good future, especially as Europe moves toward more electric and renewable energy,” said Ute Heyward, a portfolio manager at Fisch Asset Management in Zurich.

The Siemens bond matures in 2025, implying investors think the shift to renewables could start boosting clean energy stocks within three years. The other two notes convert to equity in 2027.

Until then, assets of all electricity suppliers could be in for a rocky ride as the standoff with Russia wreaks havoc with energy prices and prompts governments to intervene. A Bloomberg Index of global green bonds has slumped 27% in 2022, heading for its worst year of returns since inception in 2014.

The Kremlin said it was “stupid and absurd” to suspect that Russia was behind gas leaks, but the continent is already gearing up for a winter without any significant imports from its eastern neighbor. Gazprom warned Tuesday that Moscow may sanction Ukraine’s Naftogaz, cutting off the last remaining route to western Europe. European gas prices surged more than 20% at one point on Tuesday.

The convertible bond market has also been hammered by the crash in bonds and equities, with returns on an index of European equity-linked bonds down 18% so far this year.

The big risk is that the underlying stocks don’t recover in time for the bonds to be converted. That’s a lesson learned by investors who rushed to buy convertible bonds during the pandemic in the hope that stock markets would rebound, only to find themselves stuck in another downturn. Many convertible bonds sold in 2020 and 2021 are now trading at distressed levels.

Still, the recent plunge in equities makes the new notes very attractive, according to Pierre-Henri de Monts de Savasse, an investor at BlueBay Asset Management LLP. For issuers grappling with rising borrowing costs, the bonds provide a vehicle to sell debt with a lower coupon than conventional debt, he said.

Twenty-one European convertible bonds still have negative yields, including a handful from energy companies such as Schneider Electric SE, which specializes in improving home electricity efficiency. Swedish battery producer NorthVolt AB has also tapped into the demand for convertible debt, selling a 1.1 billion euro note in July to private investors ahead of a planned initial public offering.

“Converts are a great instrument for a long-term investment because it gives you that equity option, and investors see that opportunity in the renewable space,” said Lyle Schwartz, co-head of EMEA Alternative Equity Products at Goldman Sachs in London. “And because there’s a coupon, it offers some downside protection as well.”