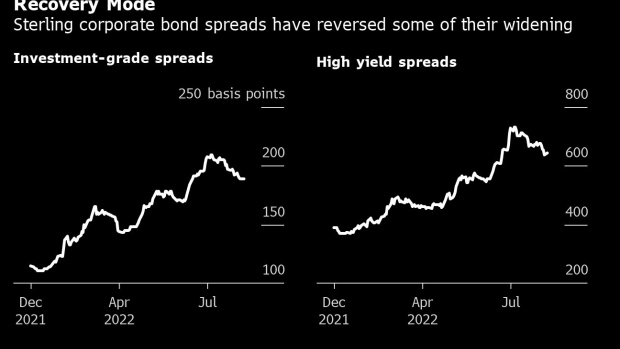 A customer pays for shopping at a grocery stall in Croydon, UK. Photographer: Hollie Adams/Bloomberg , Bloomberg

(Bloomberg) -- Investors are scouring the wreckage of the UK bond market for bargains, wagering the worst selloff since the global financial crisis has run too far.

By June 21, with surging inflation raising the likelihood the country would pitch into a prolonged recession, yields on sterling-denominated investment-grade corporate bonds had risen almost 250 basis point for the year to 4.5%, their highest level for a decade, according to Bloomberg indexes.

That proved a draw for money managers, who swooped on everything from battered junior debt of British lenders to sterling corporate bonds paying rates above comparable US and European issuers. After funds flowed back in, risk premiums for sterling high-grade and junk-rated corporate debt are now at their lowest in almost two months.

“You know what’s coming down the track -- a winter of discontent,” said Paola Binns, head of sterling credit at Royal London Asset Management, which oversees 159 billion pounds ($192 billion). “However, you’re well paid for default risk and if you take a medium-term view, the entry point is OK.”

Britons are bracing for an icy economic blast from inflation set to exceed 13% later this year and a recession that could stretch for five successive quarters, according to the Bank of England’s estimates.

Despite such travails, opportunities can emerge for investors prepared to take the view that much of the economic pain is already baked into prices.

For example, Binns snapped up a contingent convertible bond that was issued by Barclays Plc in June when banks were having to offer coupons of near double-digits to raise capital with junior debt. That security is now trading at 4 pence above its issue price.

Sterling-denominated investment-grade corporate bonds are down almost 12% this year, their worst performance on record, based on ICE BofA indices. Their junk-rated peers have lost 9.5%, the most since 2008.

“Typically, sterling high yield comes at a premium to the US and Europe as it isn’t as closely followed,” said Nachu Chockalingam, senior credit portfolio manager at Federated Hermes, which oversees $632 billion. “If you like the company, however, it’s a good way to access credit risk, given the spread premium you will likely earn.”

Chockalingam said she’s being selective about what she buys as companies in sectors that are more consumer-oriented, such as travel, leisure and autos, could come under pressure over the next six to 12 months.

However, recent price action in the sterling corporate bond market suggests that investors are happy to hunt for cheap debt, even though they know more economic storms are brewing.

“We think investors are becoming more confident that a lot of the potential bad news is already reflected in asset prices,” Eoin Walsh, a portfolio manager at TwentyFour Asset Management said in a note after the Bank of England’s latest meeting earlier this month.

Even so, he prefaced that report saying “abandon all hope ye who enter here” -- referencing the part about hell in Dante’s Divine Comedy.