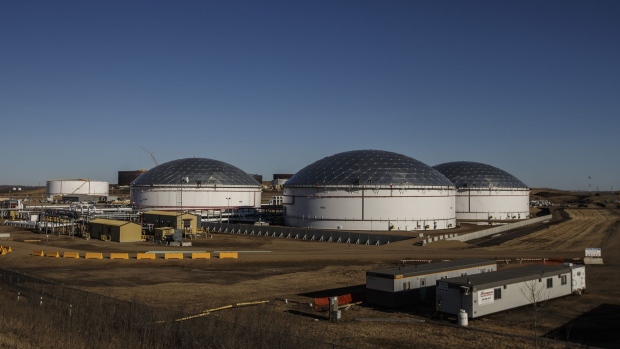 TC Energy Corp. oil storage tanks are seen in Hardisty, Alberta, Canada, on Tuesday, April 21, 2020. Since the start of the year, oil prices have plunged after the compounding impacts of the coronavirus and a breakdown in the original OPEC+ agreement. Photographer: Jason Franson/Bloomberg , Michael Bellusci and Kevin Orland

(Bloomberg) -- Canada’s big oil producers are set to give investors more evidence of how they’re battling plunging crude prices, the result of plummeting demand in the face of the coronavirus. Western Canada Select crude oil collapsed 90% from February’s high to last week’s low.

Calgary-based Cenovus Energy Inc. and Husky Energy Inc. will post first-quarter earnings on Wednesday morning, with the former already temporarily suspending its dividend in a bid to save cash. Both firms have already cut their 2020 production guidance.

Canadian energy companies have announced at least C$7.6 billion in capital spending cuts for the year, a reduction of about 33% from their originally projected budgets.

Production curtailments are poised to be a key focus for investors. Analysts have estimated Canada may need to shut-in about 1 million to 1.5 million barrels of oil per day, from an average daily production in 2019 of about 4 million.

Given the lack of crude demand coupled with low Canadian pricing and little in the way of extra storage capacity, “it is hard for us to fathom how Western Canadian crude production can avoid a ~1 million+ bbl/d drop in output in the coming weeks,” Stifel FirstEnergy analyst Michael Dunn told clients in a note.

The virus has disrupted the industry’s operations as well. Imperial Oil Ltd.’s Kearl oil-sands mine has been struck by an outbreak of the virus that has sickened at least 32 workers. TC Energy Corp. has said social-distancing measures may slow construction on projects such as its Coastal GasLink pipeline.

Here’s what analysts are saying ahead of earnings:

“Liquidity measures appear sufficient for most companies to bridge the gap in 2020, but next year could be another story,” Pardy said.

“Expect the market to look past anticipated weak 1Q prints and focus on liquidity and ability to cut, store, & place production.”