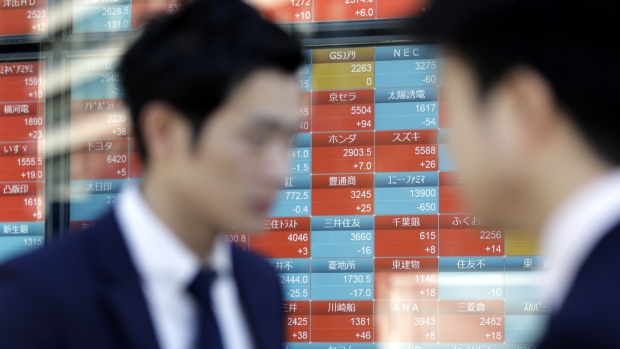 Pedestrians walk past an electronic stock board outside a securities firm in Tokyo, Japan. Bloomberg/ Kiyoshi Ota

Miners and carmakers led a decline in the Stoxx Europe 600 Index, as BMW warned earnings would fall. German chemical maker Bayer headed for the biggest drop in 15 years after losing a round in a U.S. jury trial over claims its Roundup weed killer causes cancer. Futures on the S&P 500, Dow and Nasdaq edged up. Bank UBS said conditions in the first three months have been among the toughest in years. In Asia, Japan finished higher, while most other markets dipped.

Two-year Treasury yields remained below the top of the Fed’s policy target range amid expectations of a dovish tone from the central bank, while the dollar ticked higher after three days of losses. The pound fell as U.K. Prime Minister Theresa May prepared a request for more time to reach a Brexit deal that could win support in the nation’s Parliament. The euro held steady after German producer inflation data missed estimates. European sovereign bonds were mixed.

Stock and bond markets fell into a lull as traders prepared for the Federal Reserve’s policy statement and so-called dot plot projections of interest rates. Apart from a hold on rate increases, markets will watch for word on plans for ending the Fed’s current bond-portfolio run-down. Meanwhile, Britain’s attempt to leave the European Union lumbered on in the background, with just nine days to go and no deal or extension agreement in place.

Elsewhere, emerging-market currencies and shares were steady. Iron ore fell after a Brazilian court ruled that Vale should be allowed to restart a major mine.

Company earnings this week include Tencent, Hermes, Tiffany, Micron, Nike and PetroChina. On Wednesday, the Fed is expected to hold interest rates steady, announce plans for the end of asset roll-off from its balance sheet, and lower projections for the number of interest-rate hikes this year. Central banks in the U.K., Thailand, the Philippines and Indonesia are all scheduled for policy meetings. Euro-zone purchasing manager survey numbers on Friday will give an indication of the health of the region’s industrial and service sectors.

And these are the main moves in markets: